From Pompeii to the Roman villas of Boscoreale, Oplontis and Stabiae, as well as the Libero D’Orsi Archaeological Museum of Stabiae - Royal Palace of Quisisana

This morning, Friday the 3rd of December 2021, the new ‘Pompeii ArteBus’ service was unveiled at the Auditorium of the Archaeological Park of Pompeii. This is a new minibus which will allow visitors easier access to the various archaeological sites of the Park, from Pompeii to the rustic villa of Boscoreale, Villa Regina, the noble villas of Oplontis, the Villa of Poppaea and Stabiae, including Villa Arianna and Villa San Marco, and finally the Libero D’Orsi Archaeological Museum of Stabiae at the Royal Palace of Quisisana.

This initiative was born from the collaboration between the Archaeological Park of Pompeii and the Campania Regional authorities, through Scabec and the Campania>Artecard project, and EAV.

Present at the press preview were the Director General of the Archaeological Park of Pompeii Gabriel Zuchtriegel, the President of Scabec Assunta Tartaglione and the President of EAV Umberto De Gregorio.

From the 4th of December 2021 to the 17th of January 2022 and from the 1st of April 2022 to the 4th of July 2022, on six days of every week, excluding Tuesdays (when the external sites are closed), two minibuses for 25 people will depart from Piazza Esedra at Pompeii, and will follow two different routes. 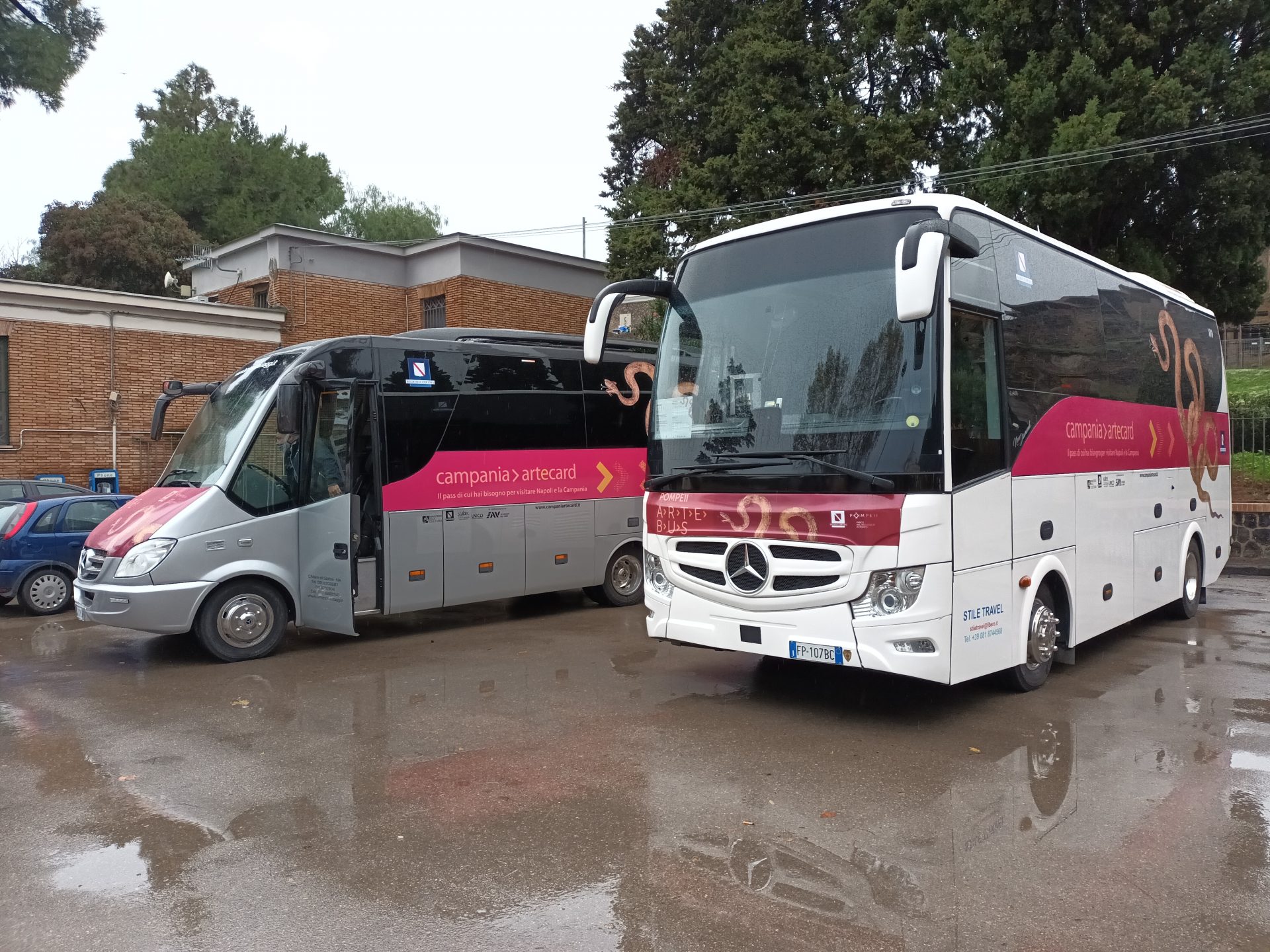 The first bus will take visitors to Villa Regina at Boscoreale and  to the Villa of Poppaea at the site of Oplontis in Torre Annunziata, and will make 7 trips per day, with the first departure at 9:30. The second bus, which will also depart at 9:30, will instead go to Villa San Marco, Villa Arianna and the Royal Palace of Quisisana, and will make 5 trips throughout the day. In the summer period, beginning on the 1st of April, the number of daily trips will increase to 9 for the Oplontis route and 6 for the Stabian sites. The buses are easily recognisable thanks to their distinct graphic design, which echoes that of the Artecard initiatives.

The service, which in this initial phase is provided free of charge, has been possible thanks to an initiative of the General Directorate of the Archaeological Park of Pompeii, utilising Campania>Artecard compensation funds, and may be used by anyone in possession of an admission ticket to the sites under the jurisdiction of Pompeii, including the MyPompeii Card pass or a Campania >Artecard pass. 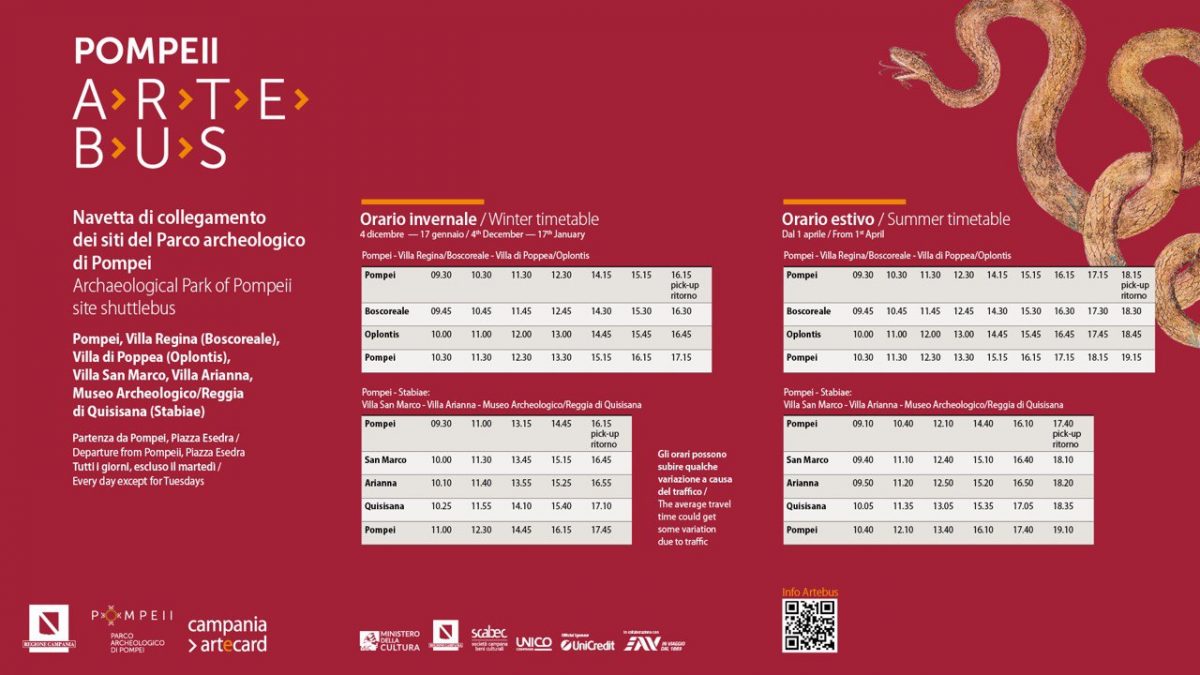 Access to the sites, in addition to being easier, is now also cheaper, with the annual MyPompeii pass which, at a cost of €35 (€8 for under 25s) + €1,50 online pre-sale, grants unlimited access throughout the year to all of the sites (Pompeii, the Villa of Poppaea/Oplontis, and Villa Regina/Boscoreale, the Stabian Villas and the Libero D’Orsi Archaeological Museum of Stabiae/Royal Palace of Quisisana).

Those who wish to combine a visit to the Vesuvian area with other museums and cultural sites across Campania may wish to consider the Campania>Artecard pass, which in its 365 gold version (at a standard cost of €43, or €33 for young people), permits entry to 50 museums twice a year, in addition to 20 other visits.  www.campaniartecard.it

“Our dream is to change the face of this extraordinary region, rich as it is in culture. Today represents only an initial step, which sees institutions involved in the project, along with local authorities, working towards the valorisation and development of peripheral, but by no means minor, sites” - explained Director General, Gabriel Zuchtriegel. “The statute of the Archaeological Park of Pompeii refers to research, protection and the valorisation of archaeological sites, but also to the mission of contributing towards the economic development of the area. We believe that the initiative we present today is heading in this very direction.”

"Pompeii Artebus, which has been established with Artecard funds, represents the synthesis of a harmonious collaboration between institutions which have the common goal of valorising the area and its cultural heritage, Connecting Pompeii with the peripheral sites, which are defined as minor yet which are anything but, on account of their beauty and archaeological interest, can serve as a model for other contexts which surround popular sites such as the Royal Palace of Caserta, the Temples of Paestum or the Phlegraean Fields. This is a project of cultural mobility which Scabec is keen to activate, and which can aid in the promotion and development of tourism”. So declared the newly appointed President of Scabec, Assunta Tartaglione.