From the 1st November, two important Pompeian dwellings reopen to the public: the House of Ceii, famous for its paintings which decorate the upper walls of the garden with Egyptian scenes and with wild animals; and the House of Julia Felix, a large residential complex with ample green areas, rich decorations and the luxurious private bath complex.

Of the two buildings, the Domus of the Ceii had been closed for several years, while the House of Julia Felix had been partially reopened following the restoration of the decorative elements carried out between 2015-2016 as part of the Great Pompeii Project. The two complexes have recently been subject to redevelopment, rainwater regimentation and roof maintenance works, made necessary by their progressive loss of functionality, which over the years had been exposing the underlying rooms to serious risks of deterioration. Said rooms are characterised by decorated plasters and highly precious floorings. The operations which were carried out form part of the ‘Italy for Pompeii’ project, financed with funding from the EU POR-FESR 2007-2013, which had already focused on other houses of Regio I and II, including the House of the Floral Lararium and the House of the Open Air Triclinium - both reopened last year.

Thus the great hunting scene with wild animals which adorns the back wall of the garden of the HOUSE OF THE CEII returns to light, along with the Egyptianised landscapes populated by Pygmies and animals typical of the Nile Delta, which are depicted on the adjacent side walls. These are subjects which often recur in the decoration of perimeter walls of Pompeian gardens, in order to give the illusion of enlarging the space and evoking within them an idyllic and enchanting atmosphere. In all probability here, the theme of the paintings testified to a link and a specific interest that the owner of the domus had for the Egyptian world and the cult of Isis, which was particularly widespread in Pompeii in the final years of the city. The paintings will subsequently undergo dedicated restoration.

Within the house, part of the original layout of the dwelling will be recreated, with the relocation of the marble table and the well curb in the atrium, where the cast of a wardrobe and the cast of the access door of the house is also visible. In the kitchen on the other hand, a small domestic millstone is visible.

The ownership of the domus has been attributed to the magistrate Lucius Ceius Secundus, on the basis of an electoral inscription painted on the external façade of the house. The face of the domus, with its white stucco panelling and high portal crowned with cubic capitals, exemplifies the severe aspect of a mid-level house of the late Samnite era (2.d century BC). At the centre of the peculiar tetrastyle atrium is the basin of the impluvium, made of amphorae shards according to a technique which was widespread in Greece but which in Pompeii is otherwise found only in the House of the Ancient Hunt. 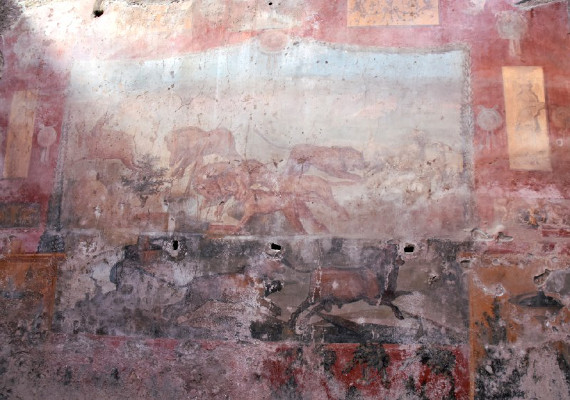 The large complex of the HOUSE OF JULIA FELIX, constructed at the end of the 1st century BC via the merging of pre-existing structures, instead appears as a kind of ‘urban villa’, complete with wide open green spaces, and divided across four different nuclei with independent entrances: a house with an atrium, a large garden onto which the residential rooms face, a richly decorated bath complex and a vast park.

The complex owes its name to an inscription painted on the façade (currently in the National Archaeological Museum of Naples), in which the final owner, Julia Felix, after the disastrous earthquake of AD 62, announced the letting of part of her property. A uniform decorative renovation dates to the post-earthquake period, which affected most of the rooms, of which the most unusual example is the summer triclinium (dining room). It was decorated as a grotto, with water features around the convivial beds and faced onto the portico marked with marble pillars. The garden, complete with a central euripus (long canal), recreated a sacro-idyllic space in its original layout. The house, excavated and then recovered at the end of the Bourbon era explorations, was fully unearthed in the 1950’s.

Both complexes will be open to the public from the 1st November, both in the morning and afternoon.

Please note that from the 1st November to 31st March the opening times of the Vesuvian archaeological sites will be as follows: