Love and sensuality in the frescoes of Regio V

THE LEDA ROOM, AN ELEGANT AND SENSUAL BEDROOM AND THE ATRIUM OF NARCISSUS RE-EMERGE FROM THE SITE OF NEW EXCAVATIONS

An elegant and sensual bedroom re-emerges in its entire beauty from the Regio V excavation at Pompeii, whose presence had been predicted when the splendid image of Leda and the Swan was unearthed some months ago, during the consolidation works on the excavation fronts along Via Vesuvio. Behind the room, a part of the dwelling’s atrium was also brought to light, with vividly coloured walls and a fresco of Narcissus at the centre of one of them, in which he sees himself reflected in the water, enraptured by his own image, according to classical iconography.

Love and the sweetness of the senses, in all of their varied forms, ooze from the rooms of this elegant dwelling that, even in the entrance hall, welcomed guests with the vigorous and auspicious image of Priapus, which was also documented some months ago and is comparable to the image in the nearby House of the Vettii.

The entire Leda room is characterised by sophisticated Fourth Style decorations, with delicate floral embellishments, interspersed by griffins with cornucopia, winged cupids, still lifes and scenes of combat between animals. The harmony of these exquisite designs even extended to the ceiling, which completely collapsed under the weight of the lapilli, and whose fragments were recovered by restorers and used to reconstruct the story. 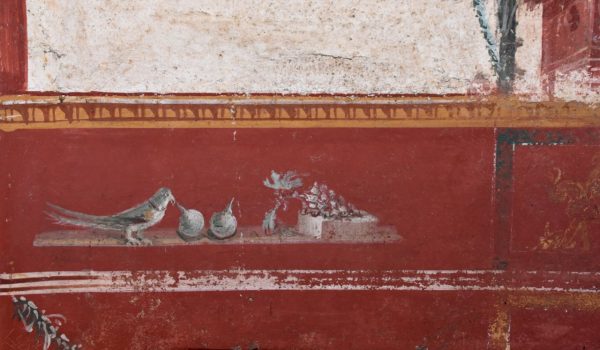 Of particular note in the atrium of Narcissus is the still visible trace of the stairs which lead to the upper floor, but above all the rediscovery of a dozen glass containers, eight amphorae and a bronze funnel in the space under the stairs, which was used for storage. A bronze situla (a liquid container) was also found next to the impluvium.

“The beauty of these rooms, which the initial discoveries had already made evident, has led us to modify the project and continue the excavation to bring the Leda room, and atrium behind, to light - declares Director Alfonsina Russo - in the future this will allow us to open at least part of this domus to the public. Its excavation has been possible in the context of the broader intervention of stabilisation and reprofiling of the excavation fronts, overseen by the Great Pompeii Project, which concerns the over 3km perimeter which runs along the unexcavated area of Pompeii. During the remodelling of the slope of the fronts, which threatened the already unearthed structures, these exceptional finds emerged. During this delicate phase, our colleague Massimo Osanna is continuing the scientific direction of the excavation in order to provide his valued and expert support, guaranteeing scientific continuity in the excavation operation.”

“The extraordinary discoveries of this site continue – declares Massimo Osanna – The scene of the myth of Narcissus, well known and present elsewhere at Pompeii, is presented in the atrium of the house. The entire room is pervaded by the theme of the joy of living, of beauty and of vanity, which is further underlined by the figures of maenads and satyrs who accompanied visitors inside the public part of the house, as though part of a Dionysian retinue. This decoration was intentionally luxurious, and probably dated to the last years of the colony, as indicated by the extraordinary preservation state of the colours.”