The Archaeological Parks of Pompeii and Herculaneum, and the schools of Pompei and Ercolano, become partners

A project to involve the children, teenagers and families of the Buffer Zone and UNESCO area of interest

This is a project involving close collaboration between the Archaeological Parks of Pompeii and Herculaneum, the Great Pompeii Unit and schools in the Vesuvius area, aimed at strengthening the bond between new generations and cultural heritage, with the twofold objectives of developing a sense of identity and belonging to the area and, following on from the Faro Convention which promotes culture as an instrument of involvement and local development, constructing a heritage community.

It is this which forms the basis of the ‘Vesuvian Landscape Laboratory’ memorandum of understanding - which has just been signed by the Archaeological Park of Pompeii, the Archaeological Park of Herculaneum, the Great Pompeii Project/Great Pompeii Unit and the Campania Regional Education Office - which provides for a practical implementation of the broader project envisaged by the Strategic Plan for the development of the areas incorporated in the management plan of the UNESCO Site ‘Archaeological Areas of Pompei, Herculaneum and Torre Annunziata’, by means of activities dedicated to students of local schools.

The‘Vesuvian Landscape Laboratory’will consist of a series of didactic projects and cultural initiatives which the students will participate in over the course of the year, culminating in a small ‘festival’ at the end of the school year.

There will be shows, concerts and exhibitions of archaeology and art to be held in the Large Theatre or at other venues in Pompeii, Herculaneum or in the other Vesuvian archaeological sites.

These projects will be conducted by the students, under the supervision of prominent individuals from the worlds of entertainment, music, archaeology and art. Among the goals are the broadening of knowledge of the various professions which gravitate around the artistic and cultural sectors, and enhancing the prospects for professional development in the future.

A core aspect of the project is that the initiatives proposed - events and exhibitions - will form part of the full cultural programmes of the Archaeological Parks of Pompeii and Herculaneum, and thus be genuinely beneficial to the public.

The parks will make available the spaces necessary for hosting these cultural events, identifying the appropriate locations; the Regional Education Office of the Ministry of Education will work towards 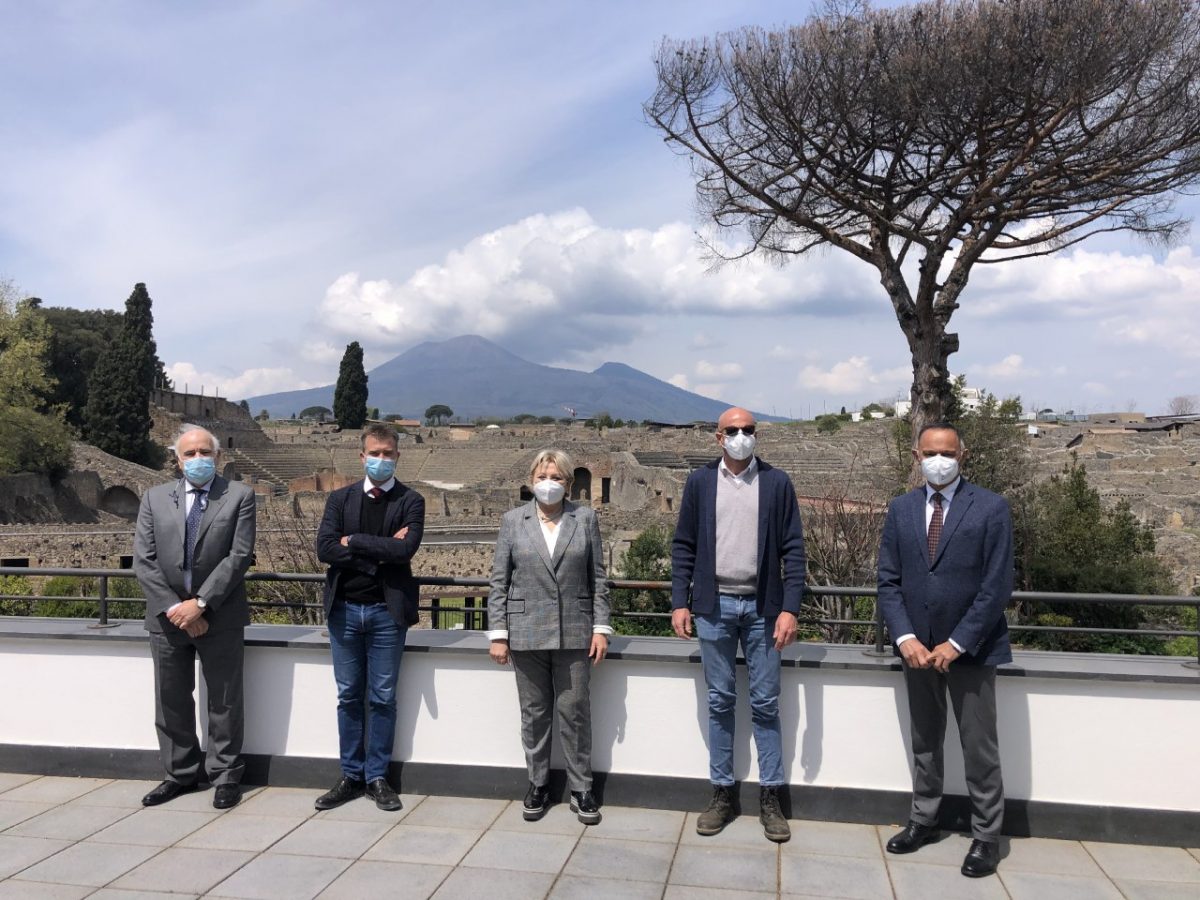 coordinating the schools of the area on the basis of a common programme. Agreements are also foreseen with universities, research and cultural bodies, local authorities, voluntary and third sector associations, which will be able to contribute to the implementation of individual cultural initiatives within the overall programme.

“The message we wouldlike to convey to the children and young people of the Buffer Zone is that they live in an exceptional place, thanks to its heritage and history, and that for it to have a future, culture needs them” - declares Gabriel Zuchtriegel, Director of the Archaeological Park of Pompeii- “This initiative continues the projects promoted under the direction of Massimo Osanna in the Buffer Zone, where the Great Pompeii Project has overseen restoration, safeguarding and development interventions, as well as the involvement of schools with the aim of better integration between heritage and the local communities. We want to offer the children and young people of the Buffer Zone the opportunity to play a leading role in cultural projects which will in effect fall under the cultural programme of the Archaeological Park, to make them feel part of an area which is unique in the world - the Vesuvian landscape which surrounds the sites buried by the eruption of AD 79, and which since 1997 has been inscribed on the UNESCO World Heritage List.”

“We would like the links which have already been established with individual schools to merge into a single strategic line, which will permit the project to be progressively expanded to include additional schools. We are particularly interested in the ‘peripheral’ entities and institutes which, on the basis of the teaching curriculum, appear more distant to archaeology”, - declares Francesco Sirano, Director of the Archaeological Park of Herculaneum - “We believe strongly in networking with schools, our young people represent our future and a love for their area should be cultivated in them, which must be expressed in the freest and most innovative ways possible. This memorandum aspires to  enhance the wellbeing and personal development of young people and their families, who will be involved in the events that are scheduled to take place at the end of the workshops. It is a method based on openness and participation, to establish a network of connections among the citizens of the UNESCO area”.

“The Strategic Plan that was adopted in 2018”, - stresses General Cipolletta, Director of the Great Pompeii Project - “considers initiatives aimed at the recognition and promotion, additionally from a tourist point of view, of the natural, historical, moral and cultural values expressed by this territory. We have therefore called for the creation of a centre for studies which serves as a catalyst for multidisciplinary research, activities and studies on the landscape, which could become a place for debate and the proposal of initiatives in the scientific and humanistic fields, as part of a relationship with schools, research institutes and universities.

The project which is hereby launched forms part of this framework, which we hope will represent the first steps towards the creation of a ‘collection centre’ (with exhibition areas and databases) for iconographic and literary material which is generated by the area, or is inspired by it, as well as for testimonies of intangible heritage (including habits and customs, and elements of the oral tradition, etc.). All of this will be able to spread to the resident population the extent and economic value for the territory of the aforementioned landscape values”.

“I wish to express great satisfaction for the signing of this memorandum of understanding. We are preparing to implement a significant multifaceted project in order to develop areas which are rich in history, culture and educational skills” - declares Luisa Franzese, Director General of the Campania Regional Education Office - “The broad aim of this initiative is education in Beauty and Awareness. We want to build a bridge between the territory in which  they dwell, and the families and young people of our schools, beginning with a greater awareness of the fact that the Archaeological Parks are not open-air museums and sites of a lifeless culture, but places of humanity. A place consists of air, light and involvement, and “a place is an opportunity” to be better people. Our methodology of approach will be characterised by the use of less ‘knowledge-giving’ and more participatory, interconnected and co-constructed forms of communication. In the words of Dostoyevsky, “Beauty will save the world” ”.