STABILISATION WORKS BEGIN IN THE INSULA OCCIDENTALIS OF POMPEII

Stabilisation works have begun in the Insula Occidentalis of Pompeii which, in a little over a year, will allow the public to enjoy the extraordinary urban villas of Marcus Fabius Rufus and Maius Castricius, as well as the House of the Golden Bracelet and the Library, which overlook the Gulf of Naples and until now have not been accessible since they are used to house the restoration laboratories of the Park.

The operation, which involves the assembly of a 65 metre crane, will allow us to reopen to visitors these residential complexes, which are unrivalled in their elegance and refinement, and span an area of almost 6,000 square metres, and are where the connection between Pompeii and the surrounding territory, between Pompeii and ‘its’ sea, takes shape and meaning. 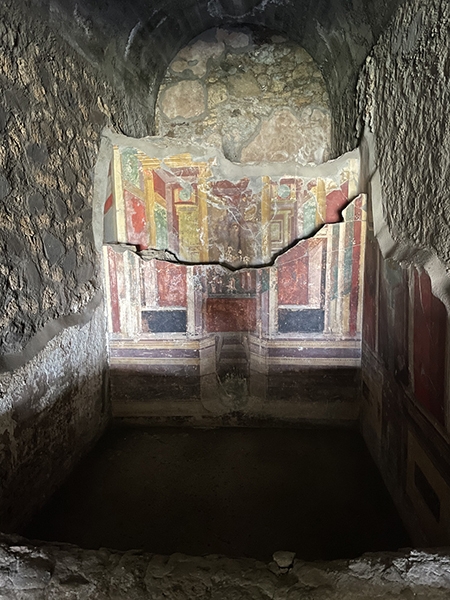 The majestic urban villa complex of the Insula Occidentalis is located at the edge of the ancient city, in Regione VI not far from the Forum. Four panoramic terraces, which slope scenically towards the sea, reveal to the visitor an iconic testament to the Roman taste for living in sumptuous and elegant dwellings, where the landscape constitutes one of the predominant elements of the overall architectural composition.

Frescoes, mosaics and furnishings are the elements still present today that construct a space within which one may experience the pleasure of living and everyday luxury: spaces immersed in a refined beauty provided by paintings with cultured literary references, or depicting lush open gardens overlooking the valley where the river meets the sea; floor mosaics with coloured marbles originating from various regions of the empire decorated the rooms, whilst spectacular water features enhanced the outdoor dining areas.

The works are being financed by CIPE funds from the ‘Culture and Tourism’ Management Plan Fund for Development and Cohesion (FDC), as well as with funds from the Archaeological Park of Pompeii itself, and will be concluded in a year’s time, when not only the public and domestic spaces of the buildings will reopen to visitors, but also their gardens and internal green areas, where they will be able to rediscover, today, that complex link between culture and nature which characterised the life of ancient Pompeians.

Insula Occidentalis of Pompeii - marble slabs ready for the reconstruction of flooring discovered Today we are back at the work site of the House of the Library, where restoration and stabilisation work continues on the Insula Occidentalis, in one of the most important operations currently in progress at Pompeii, where archaeological excavations which we are conducting have already unearthed a series of discoveries which I must say are exceptional. Here we are in a part of the domus that has never been excavated before - this is one of the so-called ‘houses on a slope’, part of a multi-storey edifice built around the city walls and transformed into a luxury residence. Indeed the elements of the room which we are uncovering reveal all its luxury, starting with the very interesting and elegant floor mosaic with the Greek key border, the meander, and with the refinements that we find in other rooms of the domus of Pompeii, which feature a central square with the alternation of white and black tesserae. We must remember that before the eruption, houses in Pompeii probably endured a seismic swarm that likely preceded the devastating effects of the eruption, and may have sustained damage from this earthquake swarm, even more perhaps than the earthquake of AD 62, so several years prior to the eruption. What is clear is that there were certainly rooms which were undergoing restoration, and that refurbishments were underway, Excavations have revealed a work chest, of highly refined workmanship. It is a chest which obviously over time has been partially lost, but it has been possible to recover traces of it through casts of the walls. It was a small chest which contained slabs of precious marble, of coloured marble. We have Peloponnesian green and Numidian yellow, and evidently they were marble slabs which the restorer, as we will call him today, was using to repair the damage or replace parts of furnishings or floor elements in adjacent rooms. Above this small chest was what some say may have been a kind of sample set of marble which was perhaps available for the owner to choose from, but this is pure conjecture. What is certain is that it is a series of marble slabs that are rather thin, and therefore extensively worked, representing precious marbles from various parts of the ancient world. Above this small chest was a basket. The basket is sadly lost but also in this case the imprint of it has been preserved, because in the cinerite block the space originally occupied by the basket, itself long since decomposed, has been preserved, and by pouring in plaster it has been possible to recover the form of this basket. It was a basket whose contents we are now analysing in our laboratories. It may also have been empty, or simply placed there for materials to be deposited inside. What is certain, as we imagine this craftsman who was choosing his slabs in order to work in this part of the house which remains to be excavated, is that further excavations will surely lead to new discoveries and surprises.

Welcoming us to the House of the Library is the poet of the 5th century BC, Philoxenus of Cythera, whose identity we have known for some years now, on account of the writing, and the name inscribed on this fresco. It is a very unusual Pompeian house, and is part of the Insula Occidentalis of Pompeii - this large complex of buildings which overlooked the Gulf of Naples, standing on the ancient walls of the city and extending from Porta Marina to Porta Ercolano. Within this insula, a part of this insula, notably four domus, are the subject of a series of interventions, of restoration, stabilisation and archaeological excavation, in particular the House of Castricius, the House of Fabius Rufus, the House of the Golden Bracelet and indeed this one, the House of the Library. Why the House of the ‘Library’? Precisely because in this room in which we find ourselves, a wardrobe was found, traces of a wardrobe were found which contained scrolls belonging to the owner of this house, who must have been a highly cultured person and likely belonged to a learned society, considering he wanted the image of a rather niche figure frescoed on the wall of his library, in the form of this dithyrambic poet, Philoxenus of Cythera. As part of the stabilisation and restoration works in this insula, we have resumed the excavations which had initially been partially carried out in the 1970’s. This continuation of the archaeological excavations is revealing a series of exceptional discoveries. First of all, signs of what occurred over time at Pompeii, signs that Pompeii suffered tremendous destruction, not only the eruption of AD 79 but also the great earthquake of AD 62 which struck the city, and this part of the city in particular. In the wake of this major earthquake, the house, which was inhabited and continued to be inhabited, was refurbished, and we can see traces of this refurbishment. Before the eruption of AD 79, Pompeii undoubtedly experienced a series of earthquake swarms, of seismic events which must have compelled the owners of the house to refurbish it once again. During the course of our studies, we are uncovering the signs of these works, which must have been in progress at the time of the eruption. At the time of the deadly eruption, with all of the upheaval and destruction it caused, Pompeii was literally covered by a layer of volcanic material, of ash and lapilli, before the arrival of the pyroclastic flow which engulfed the rooms in which we are standing, sealing the house until the 18th century. In the mid-18th century, when Pompeii was rediscovered in the modern era, the Bourbons began the excavation works, which were excavations conducted underground through the opening of tunnels which burrowed below and inside this volcanic material, leading to the discovery of the treasures which are today preserved at the Archaeological Museum of Naples. In these houses too, we find such traces, and we are looking to preserve them precisely as a record of an ‘additional upheaval’, of what Pompeii was and what Pompeii still is today, as well as other signs from later time periods. Perhaps not everybody knows that in the September of 1943 Pompeii was repeatedly bombed. Over a hundred bombs fell on the ancient city, and two of these fell right onto this house, embedding in the neighbouring rooms, including one in the tablinum, which would devastate the remains of this architecture once again. Here then, our challenge lies precisely in allowing future visitors to rediscover these traces of the past, and therefore to be able to interpret all of these disastrous events, the signs of these events, the deformation of the masonry and the damage wrought by this succession of devastating occurrences. It is a challenge, and it is the challenge of this operation.