Home » Comunicati Stampa » THE SNACK BAR OF REGIO V RESURFACES IN ITS ENTIRETY WITH SCENES OF STILL LIFE, FOOD RESIDUES, ANIMAL BONES AND VICTIMS OF THE ERUPTION
26 December 2020

THE SNACK BAR OF REGIO V RESURFACES IN ITS ENTIRETY WITH SCENES OF STILL LIFE, FOOD RESIDUES, ANIMAL BONES AND VICTIMS OF THE ERUPTION

The Thermopolium of Regio V, one of the snack bars at Pompeii,  complete with an image of a Nereid riding a sea-horse, which had previously been partially excavated in 2019, re-emerges in its entirety, with other rich decorative still lifes, food residues, animal bones and victims of the eruption. 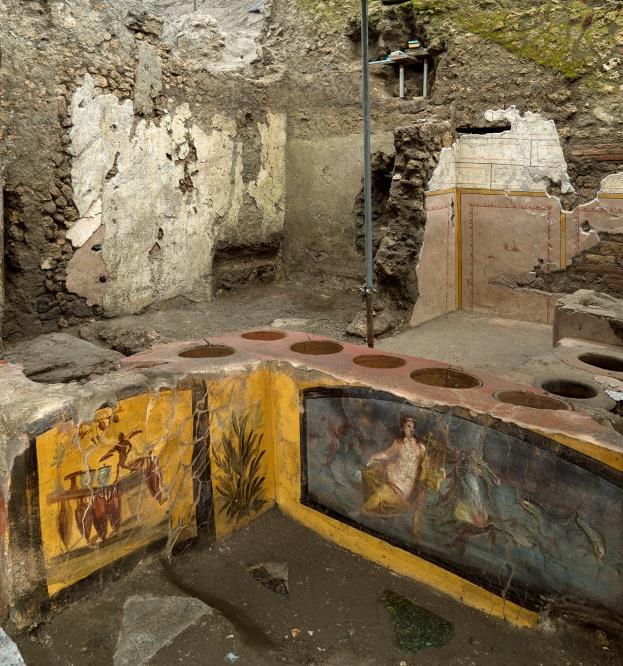 The commercial structure had only been partially studied in 2019, during the interventions of the Great Pompeii Project aimed at stabilising and consolidating the historic excavation fronts.

Considering the exceptional nature of the decorations, and in order to restore the complete layout of the restaurant, which is located in the clearing between Vicolo delle Nozze d’Argento andVicolo dei Balconi, it was decided to broaden the project and complete the excavation of the entire area. 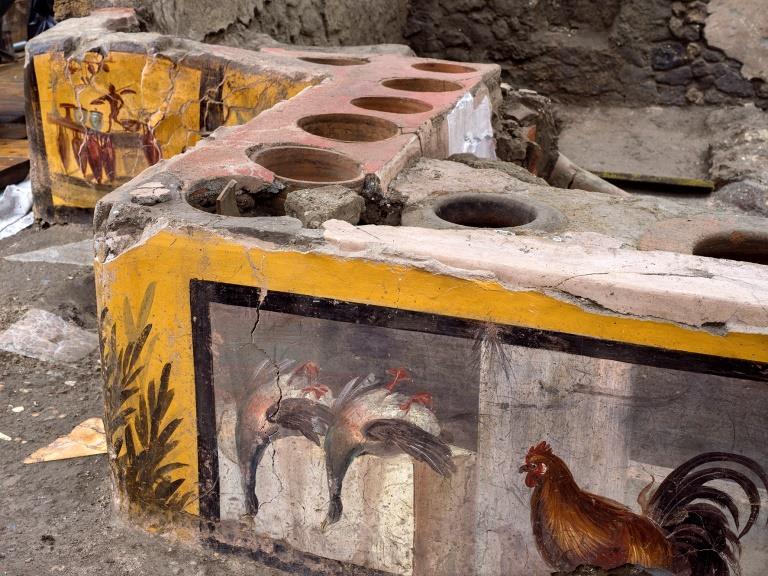 In the small square in front of the Thermopolium,works had already revealed a cistern, a fountain and a water tower, which were all located a short distance from the shop which features the famed fresco of gladiators in combat.

The decorations on the counter - which were the first to emerge during the excavation  - comprise the image of a Nereid riding a sea-horse in a marine setting on the front, while the shorter side features an illustration which is probably of the shop itself, like a kind of trademark. It was not by chance that the discovery during the excavation of amphorae, located in front of the counter, reflected the painted image. 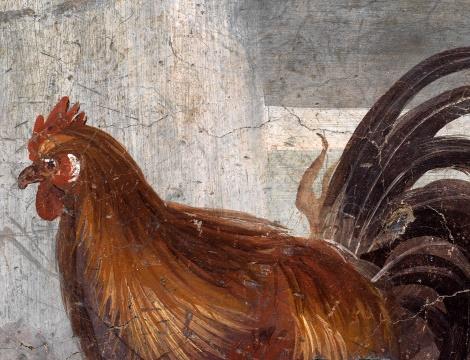 In this new phase of excavation, the last section of the counter to be unearthed revealed other exquisite scenes of still life, with depictions of animals which were likely butchered and sold here. Bone fragments belonging to the same animals were also discovered inside containers embedded in the counter, which held foodstuffs intended for sale, such as in the case of the two mallard ducks shown upside down, ready to be cooked and eaten; a rooster; and a dog on a lead, the latter serving almost as a warning in the manner of the famed Cave Canem.

A mocking inscription can be found scratched onto the frame which surrounds the painting of the dog: NICIA CINAEDE CACATOR - literally “Nicias(probably a freedman from Greece) Shameless Shitter!” This was probably left by a prankster who sought to poke fun at the owner, or by someone who worked in the Thermopolium. 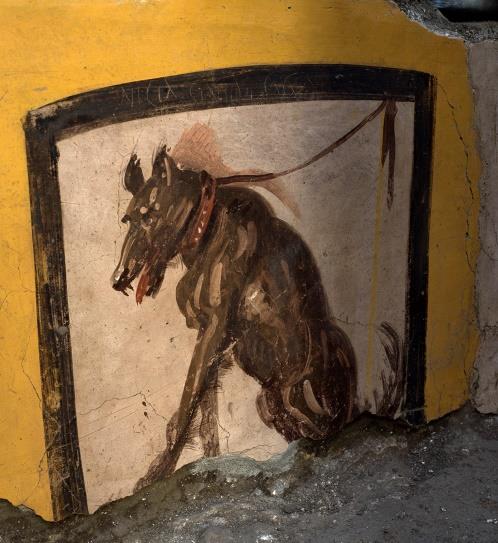 "As a result of teamwork, which required a legislative framework and professional staff, Pompeii today serves as a model of heritage protection and management, and is once more one of the most visited sites in Italy, where research is carried out, excavation continues and extraordinary discoveries like these are made", noted Dario Franceschini, Minister for Cultural Heritage and Activities and Tourism, in response to the new discoveries in Regio V of the excavations of Pompeii.
“As well as being another insight into daily life at Pompeii, the possibilities for study of this Thermopolium are exceptional, because for the first time an area of this type has been excavated in its entirety, and it has been possible to carry out all the analyses that today’s technology permits,” - declares Massimo Osanna, Interim Director General of the Archaeological Park of Pompeii - “the materials which have been discovered have indeed been excavated and studied from all points of view by an interdisciplinary team composed of professionals in the fields of physical anthropology, archaeology, archaeobotany, archaeozoology, geology and vulcanology. The finds will be further analysed in the laboratory, and in particular those remains found in the dolia (terracotta containers) of the counter are expected to yield exceptional data for informing an understanding of what was sold and what the diet was like”. 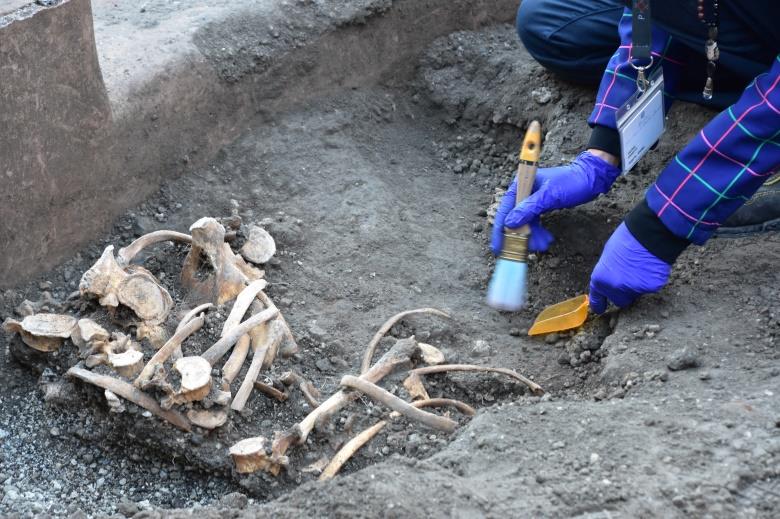 Another observation of note is the discovery of human bones, albeit found sadly dispersed as a result of the tunnels which were dug in the 17th century by illegal excavators, who were searching for precious objects.

Several belong to an individual of at least fifty years of age, who at the moment when the pyroclastic current arrived, was most likely on some kind of bed, as evidenced by the space set aside for storing the bed, and a series of nails and wood residues found under the body.

Other bones, which are yet to be investigated, belong to another individual, and were found inside a large dolium, possibly where they were placed by the first excavators.

Furthermore, in the Thermopolium, various pantry and transport materials were discovered, including: nine amphorae, a bronze patera, two flasks and a common ceramic table olla. The flooring of the entire room consisted of a layer of cocciopesto (a waterproof covering made of terracotta fragments), into which fragments of polychrome marble (alabaster, portasanta, green brecciaand bardiglio) were inserted in several areas.

The Thermopolia, where drinks and hot foods were served, (as indicated by the name of Greek origin), and stored in large dolia (jars) embedded in the masonry counter, were widespread in the Roman world, where it was typical to consume the prandium (the meal)outside the house. In Pompeii alone there are eighty of them. 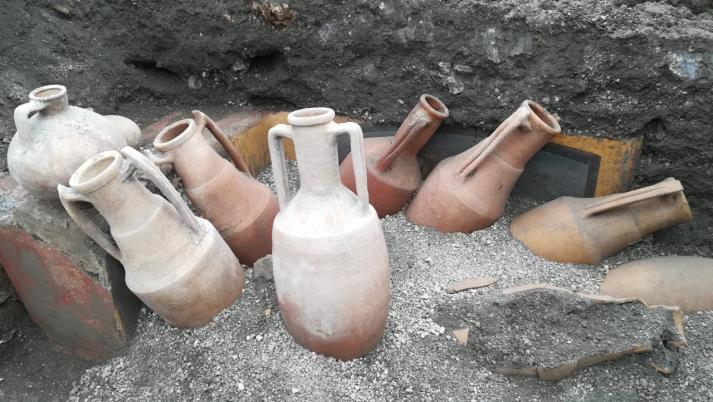 The first analyses confirm that the paintings on the counter depict, at least in part, the foodstuffs and drinks which were actually sold inside the Thermopolium. The paintings on the counter include two mallard ducks, and indeed a fragment of duck bone was in fact found inside one of the containers, alongside swine, goats, fish and land snails, indicating the great variety of products of animal origin used in the preparation of the dishes.

On the other hand, the first archaeobotanical analyses have allowed us to identify fragments of deciduous oak, which probably belonged to structural elements of the counter. At the bottom of a dolium - which has been identified as a container for wine on the basis of the bottle for drawing the liquid that was found inside it - the presence of beans was detected, which had been intentionally broken apart or ground. In his De re Coquinaria (I,5), Apicius explains the reason for this, asserting that they were used in order to modify the taste and colour of the wine, bleaching it.

The complete skeleton of a dog was found in the corner between the two doors of the Thermopolium (in the northwestern corner of the room). It was not a large and muscular dog like the one depicted on the counter, but an extremely small specimen, about 20-25cm high at the shoulder despite being an adult dog. Although quite rare, dogs of such small size indicate that intentional selection took place in the Roman age in order to obtain such a result.

Inside the room - and particularly behind the counter where they were dragged by the first excavators - a significant number of human bones were found, belonging to a mature-senescent individual, of at least 50 years of age. An initial analysis made it possible to link these dispersed bones with what remained of an individual who was discovered in the innermost corner of the shop, and who, at the time the pyroclastic current arrived, was most likely on top of some kind of bed, as evidenced by the space set aside for storing the bed, and a series of nails and wood residues found under the body.

The bones belonging to at least one other individual, which were discovered inside a large dolium, and were probably positioned in this way by the first excavators, are still to be investigated.

This is merely the initial macroscopic data yielded by the ongoing excavation, but it will surely not be the last. Indeed, the finds collected and brought to the laboratory will be analysed further, through specific studies in departments and universities with whom we have an agreement, which will allow us to further refine the data at our disposal, and therefore also our knowledge of the Thermopolium and the site.