THE DISCOVERY OF A TORTOISE FROM 2,000 YEARS AGO AND HER EGG

A story of Pompeii as a complex ecosystem

between earthquake and eruption

The remains of a tortoise, with a fragile egg within her shell, have been discovered in a shop on Via dell’Abbondanza; testimony of a rich ecosystem at Pompeii, composed of natural and not only anthropic traces, and precious archaeological evidence of the final phase in the life of the city, following the violent earthquake of AD 62 and preceding the fateful eruption of AD 79.

The unusual discovery occurred as part of a research and excavation campaign on the Stabian Baths, conducted by the Freie Universität Berlin and the ‘Orientale’ University of Naples in collaboration with the Archaeological Park of Pompeii, and aimed at investigating the urban development of this residential district prior to the establishment of the baths. Notably, this year, in the shops which open onto the southeastern side of the baths along Via dell’Abbondanza and Vicolo del Lupanare, the remains of a sumptuous domus emerged, with elegant mosaics and wall paintings, dating to the 1st century BC and razed to the ground by the earthquake which devastated Pompeii and large swathes of Campania in AD 62. The area was subsequently used for the expansion of the bath complex at the intersection of Via dell’Abbondanza and Via Stabiana.

“The ongoing excavation campaign at Pompeii - declares Minister of Culture, Dario Franceschini - continues to yield new finds and significant discoveries, confirming the extraordinary richness of this true treasure trove of history and memory which fascinates the entire world”. 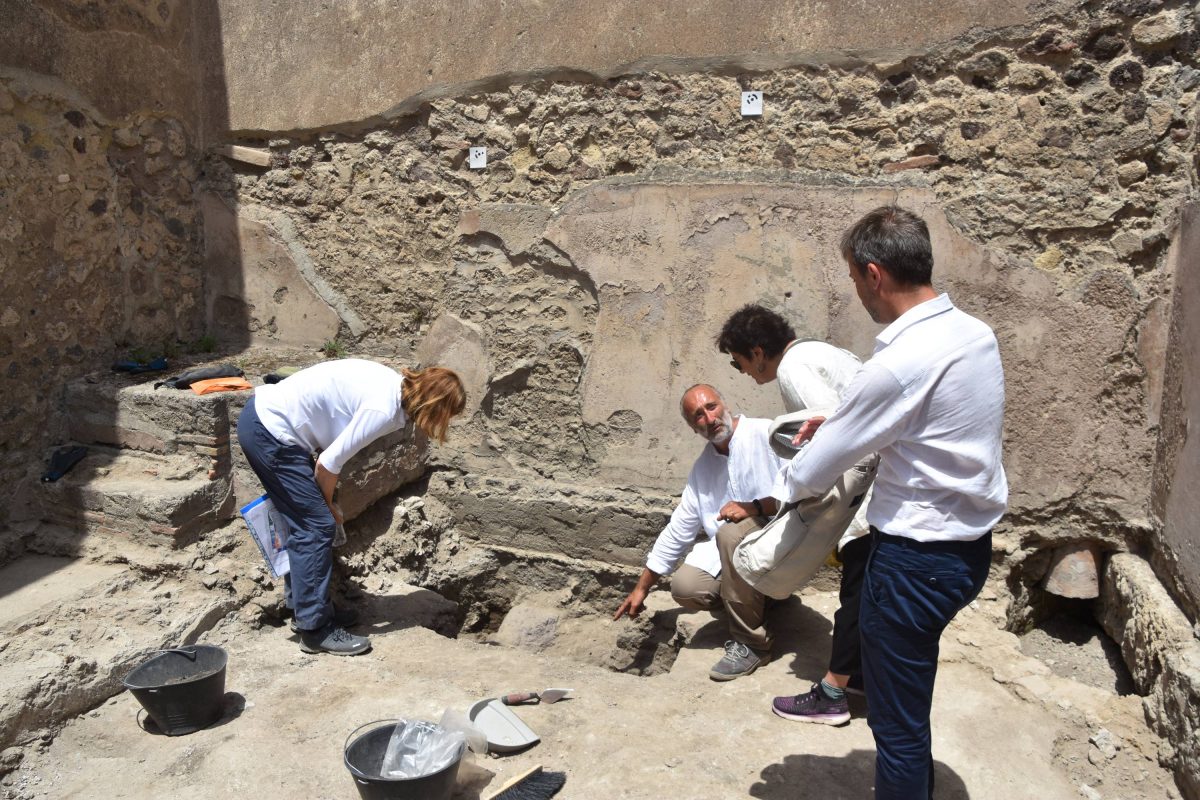 The excavation saw the unexpected discovery of a small reptile: the archaeological layers in which it was found were accumulations of debris, formed following the dismantling of the shop in question, with a view to its repurposing. During the reconstruction and refurbishment phase between the earthquake and the eruption, the reptile was able to enter the disused spaces and dig a lair, undisturbed. 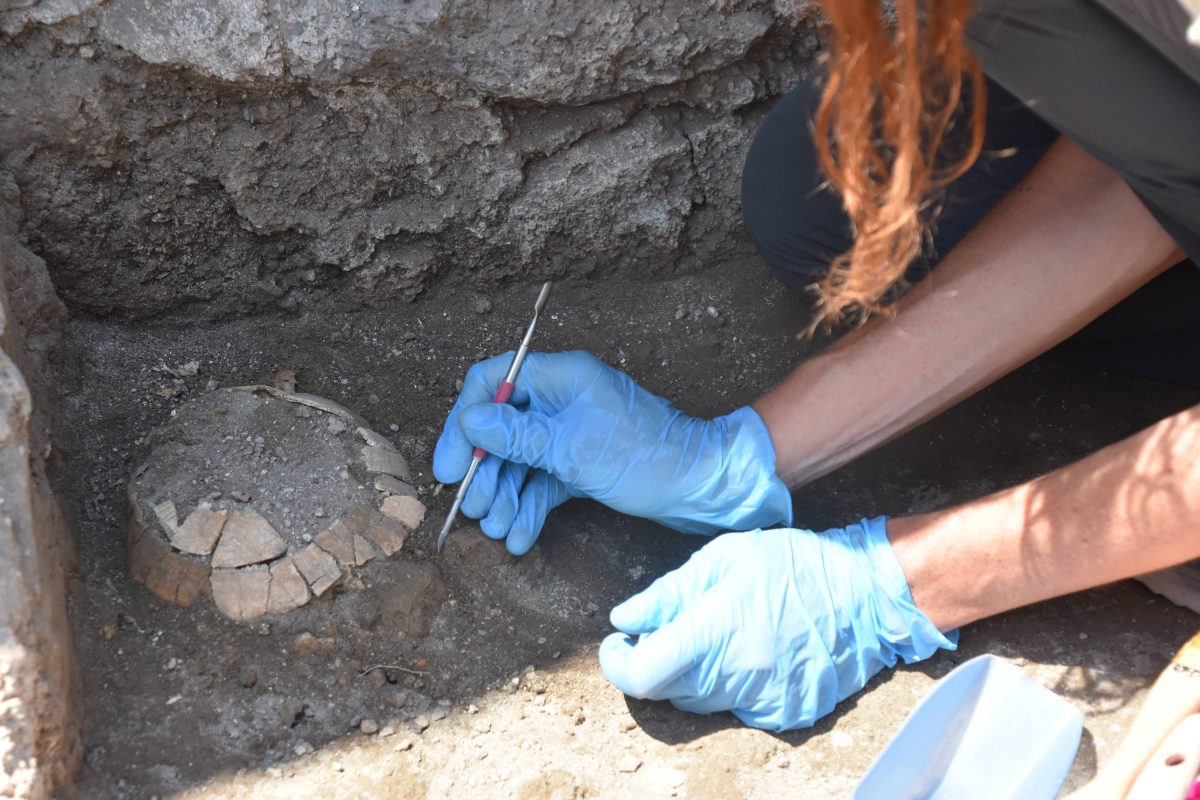 This is not the first discovery of a tortoise at Pompeii, but the others have usually been found in gardens or in areas inside wealthy domus, such as for example the House of Julius Polybius.

The tortoise was documented and removed in three successive phases: documentation of the carapace (c. 14cm, while a fully mature specimen typically measures 20-24 cm), of the internal skeleton of the animal and of the plastron (i.e. the ventral part of the shell). The find was transferred to the Park’s Laboratory of Applied Sciences, where it will be studied and analysed by the Park's zooarchaeologist. 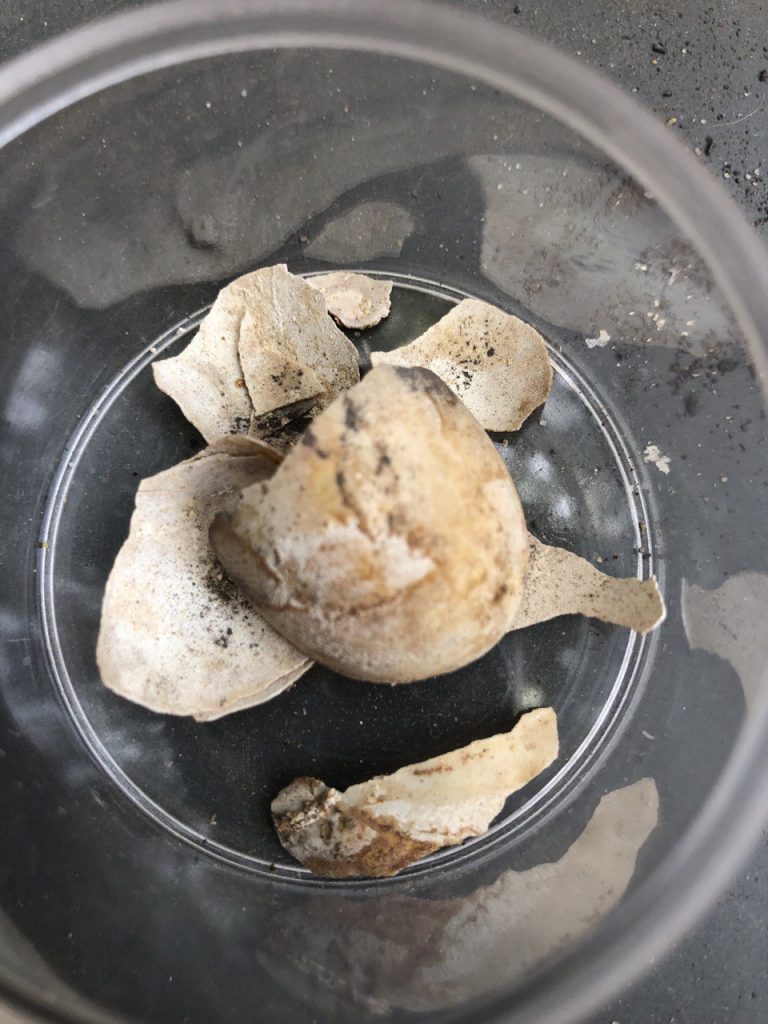 This female Testudo hermanni specimen, a local species, had probably taken refuge in the disused space in order to find a suitable place to lay her only egg (between 1 and 5 eggs are usually laid). 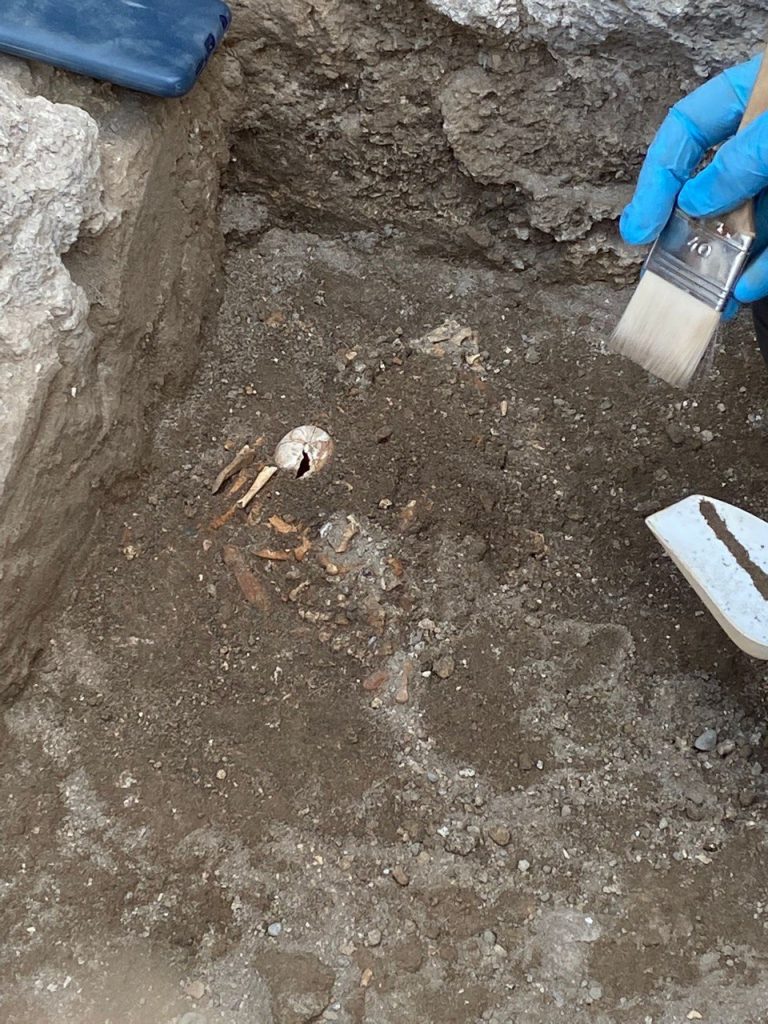 Tortoises have a peculiarity, dystocia, whereby if they are unable to find a suitable place to lay their eggs, they can retain them, only to subsequently encounter problems that are often fatal. They therefore prefer to die, rather than lay eggs where the environment is not congenial.

The intrusion of the animal was not noticed by those who were working on the repurposing of the shop, and its remains were covered without being spotted.

“Both the presence of the tortoise in the city and the abandonment of the sumptuous domus, that made way for a new sector of the Stabian Baths, illustrate how extensive the transformations were which took place after the earthquake of AD 62” - declares Director General Gabriel Zuchtriegel - “Evidently not all of the houses were rebuilt, and areas of the city, even some in the centre, were so little frequented as to become a habitat for wild animals; at the same time the expansion of the baths is a testament to the great confidence with which Pompeii resumed life after the earthquake, only to then be crushed in a single day in AD 79. The tortoise represents a piece to be added to this mosaic of relationships between culture and nature, as well as community and environment, which represent the story of ancient Pompeii. Over the coming years, the study of organic finds and research into agriculture, economics and demographics at Pompeii and its hinterland will be a priority in our strategy of research, protection and valorisation, as will giving greater exposure to sites and monuments beyond the urban centre, such as the rustic Villa of Boscoreale and the villas of Torre Annunziata and Castellammare di Stabia.” 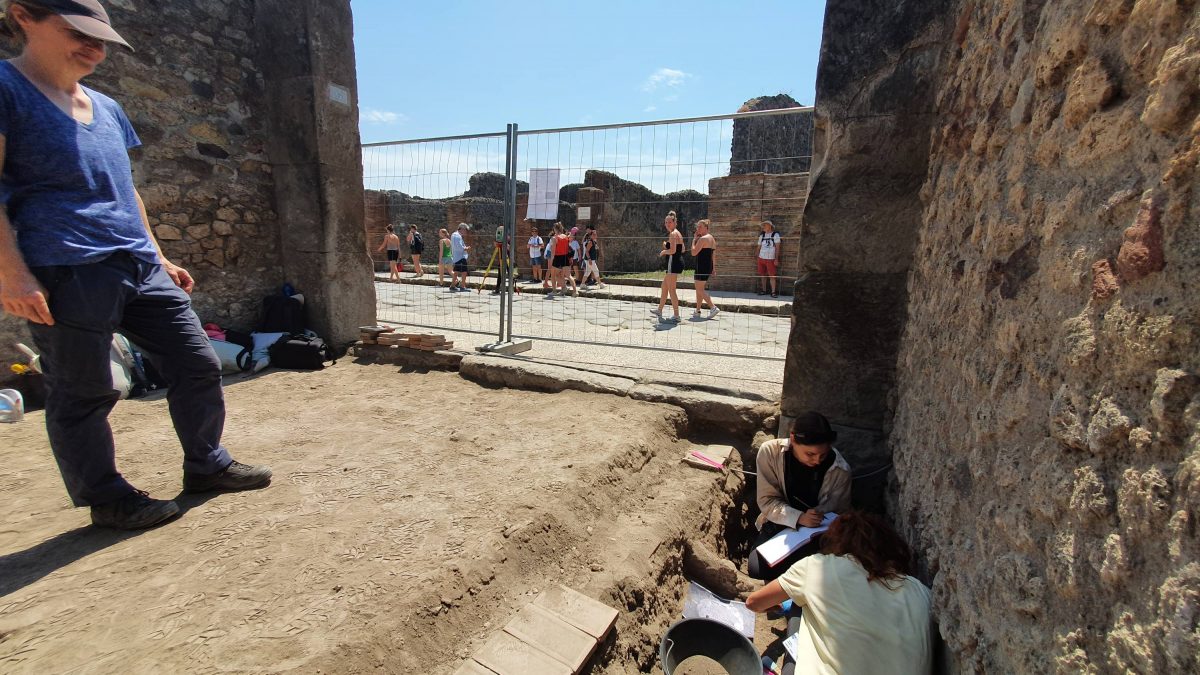 Conducted by an international team of 3 universities, the excavation - which is also an educational excavation aimed at fostering new generations of young archaeologists -  has studied the shops at nos. 6 and 7, characterised by a façade made of Nocera tuff blocks, on Via dell’Abbondanza to the west of the entrance to the baths.

Shop 6, where the discovery was made, was in its earliest phases annexed to the baths by means of a door in the northern wall, which was later sealed. At a certain stage prior to the earthquake of AD 62, a quadrangular basin not covered in cocciopesto was built in the southwestern corner of the shop. Just behind the basin, on its outer side, in the corner between the northern wall of the basin and the eastern wall of the shop, the tortoise was found, which had made its lair after having dug a small tunnel which must have begun at the post-earthquake floor level, reaching a secure area. 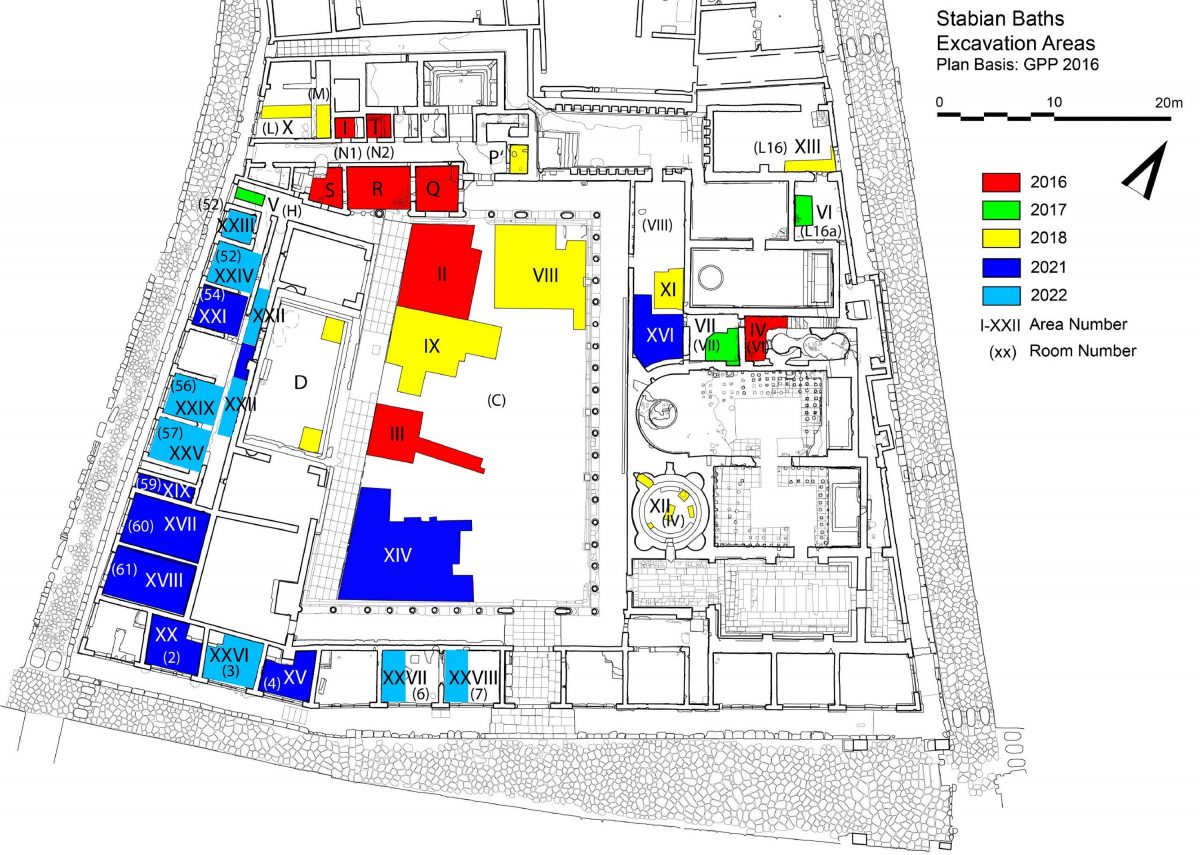