Small furnished rooms have been discovered around a sumptuous lararium with a depiction of an ‘enchanted garden’, previously excavated in 2018 during the course of maintenance operations on the excavation fronts.

The household life of Pompeii is brought to light once more: the final moments of life captured in the furnishings shattered by the eruption of AD 79. Plates, vases, amphorae, glass and terracotta objects left in chests and cabinets, hastily abandoned during the disaster and now recovered with the tools of stratigraphic excavation. But also, less documented objects emerge, such as a precious decorated incense burner, and a unique group of seven waxed tablets bound by a cord, of which it has been possible to make a cast.
It constitutes the most recent discovery to be made at Pompeii in the northern area of the so-called Regio V, one of the largest districts of the ancient city, which was previously the target of excavations in 2018, as part of a broader intervention aimed at maintenance and stabilisation of the excavation fronts along the perimeter of the un-excavated area of the city, overseen by the Great Pompeii Project.

In this area, accessed from Vicolo di Lucrezio Frontone, a luxurious and richly decorated lararium emerged in 2018. It was a room used for worship, which on one wall featured a niche sacred to the ‘Lares’, the protective deities of the household, and below two ‘agathodaemon’ serpents (‘good’ daemons), symbolising prosperity and good luck. It is surrounded by walls painted with depictions of idyllic landscapes and lush nature with plants and birds, and on one side hunting scenes upon a red background occupying an entire wall.

In 2021, an excavation and restoration project of the Archaeological Park of Pompeii provided for the expansion of the archaeological investigation to the upper rooms on the first floor, and those on the ground floor, in front of the lararium, which led to the discovery of the rooms (two above and two below) which still concealed additional varied furnishings, of which it has been possible to make casts, and everyday objects.

“Pompeii truly never ceases to amaze, and is a wonderful tale of redemption, proof that when in Italy we work as a team, and invest in young people, in research and innovation, extraordinary results can be achieved” – declares Minister for Culture, Dario Franceschini

“Pompeii is an ongoing discovery that continues to inspire awe” – emphasises Massimo Osanna, Director General of Museums - “and not only from a romantic point of view, which undoubtedly marks the interest not only of scholars, but also, above all, for its unique quality of being an inexhaustible laboratory of study and learning, which allows research to never cease, and for new hypotheses and reasoning to be advanced. The Great Pompeii Project, with which other excavations were carried out due to greater needs of protection, has provided for the Archaeological Park of Pompeii an experience and a methodology that is today being pursued on a regular basis and yet still produces exceptional results.”

“In the Roman Empire there was a significant proportion of the population which fought for their social status and for whom the ‘daily bread’ was anything but taken for granted. It was a social class that was vulnerable during political crises and famines, but also ambitious to climb the social ladder. In the House of the Lararium at Pompeii, the owner was able to embellish the courtyard with the lararium and the basin for the cistern with exceptional paintings, yet evidently funds were insufficient to decorate the five rooms of the house, one of which was used for storage. In the other rooms, two on the upper floor which could be reached by a mezzanine, we have discovered an array of objects, some of which are made of precious materials such as bronze and glass, while others were for everyday use. The wooden furniture, of which it has been possible to make casts, was extremely simple. We do not know who the inhabitants of the house were, but certainly the culture of otium (leisure) which inspired the wonderful decoration of the courtyard represented for them more a future they dreamed of than a lived reality.”

THE ROOMS OF THE LOWER FLOOR, FULLY FURNISHED

In the rooms below all of the furnishings of the room were able to be recovered, since the voids created in the cinerite during the excavation phase made it possible to create casts of the furniture (the technique involves liquid plaster being poured into the voids, which once solidified recreates the shapes of the objects or of bodies).

One of the rooms features a bed, of which parts of the frame have been preserved, as well as the volume of the pillow, of which the texture of the fabric is still visible. The type of bed is identical to that of three beds discovered last year in the Villa of Civita Giuliana in the ‘Room of the Slaves’ - it comprises an extremely simple cot, devoid of decoration, which was without a mattress and could be dismantled. One stretched out on a form of rope netting, of which traces are preserved in the plaster cast, over which a piece of fabric which was laid. 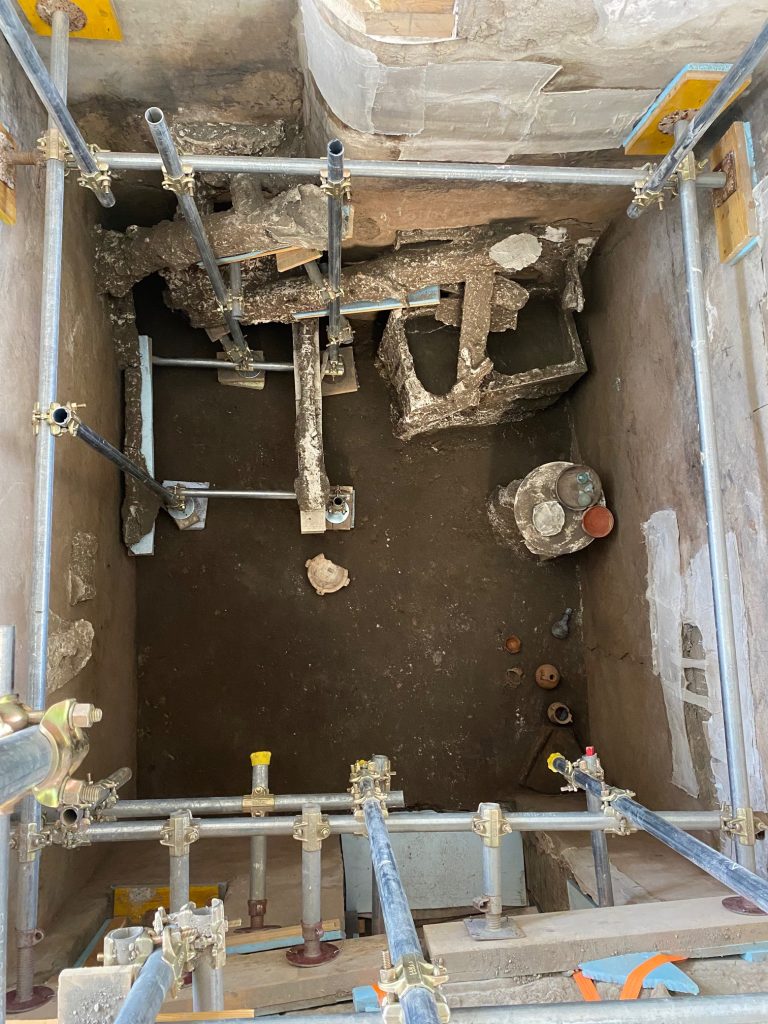 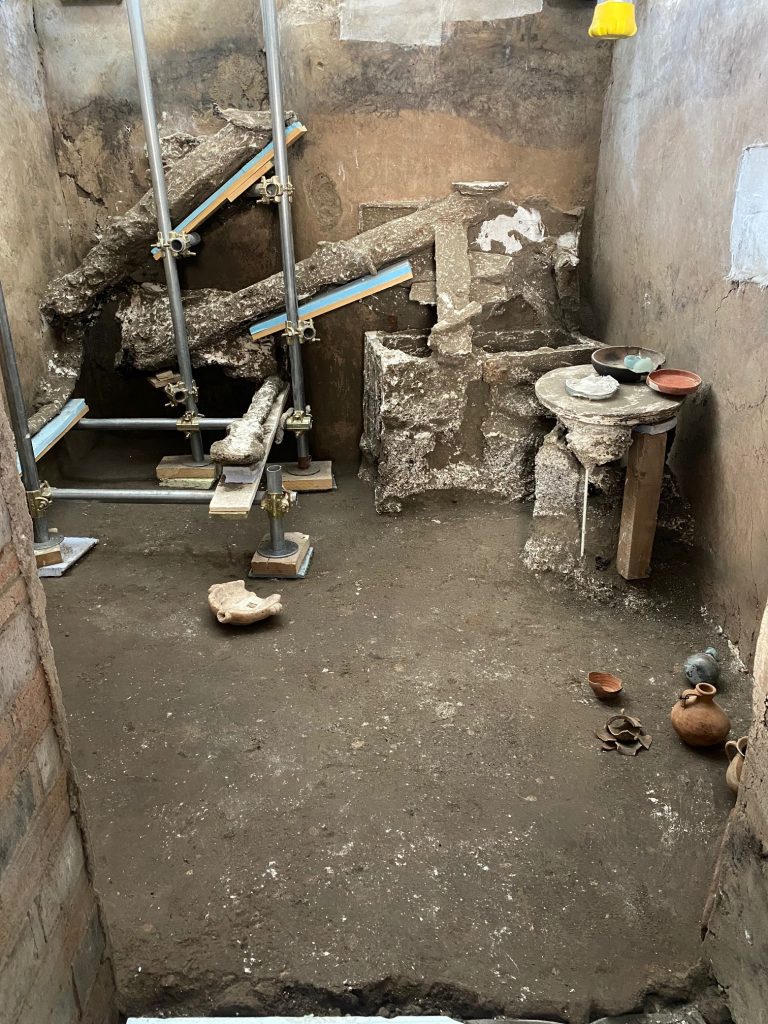 Alongside it was a bipartite wooden chest, left open at the moment when the owners fled, and onto which beams and planks from the ceiling above collapsed. 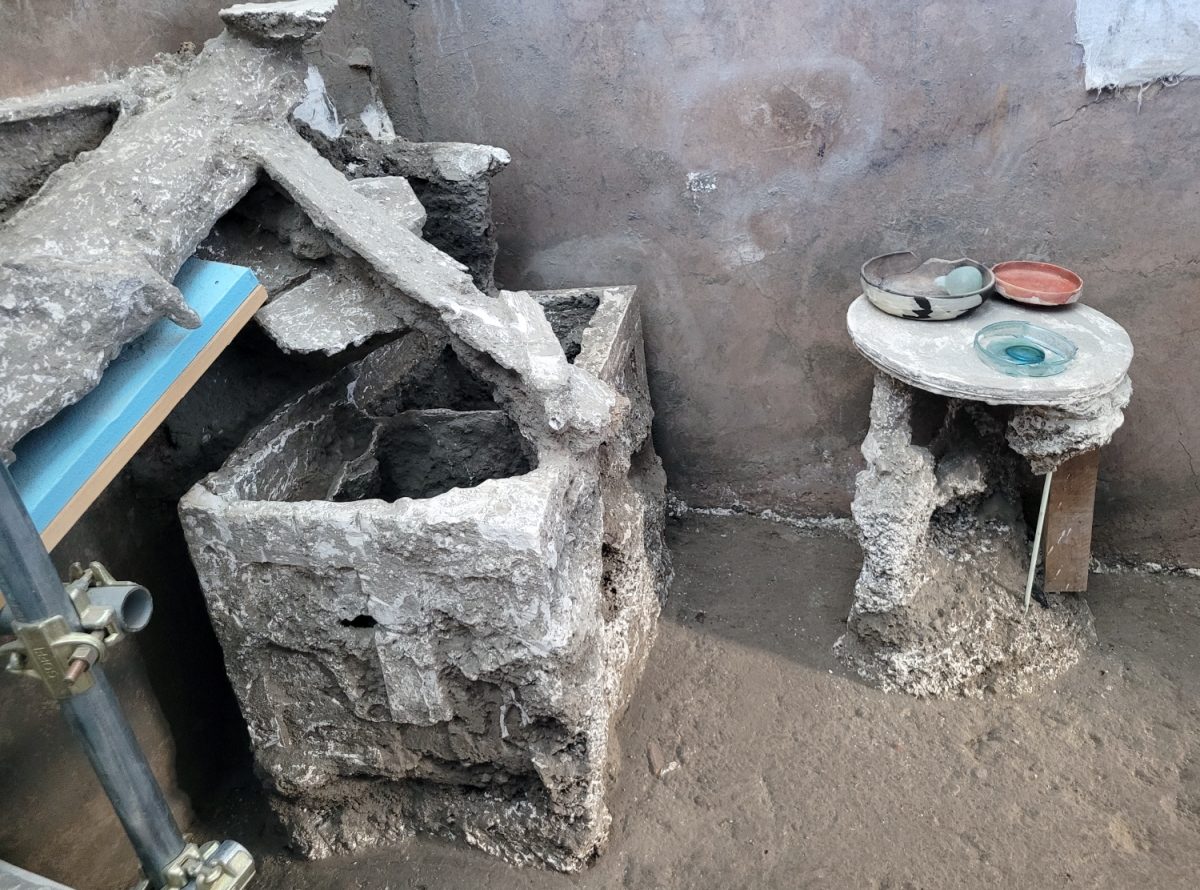 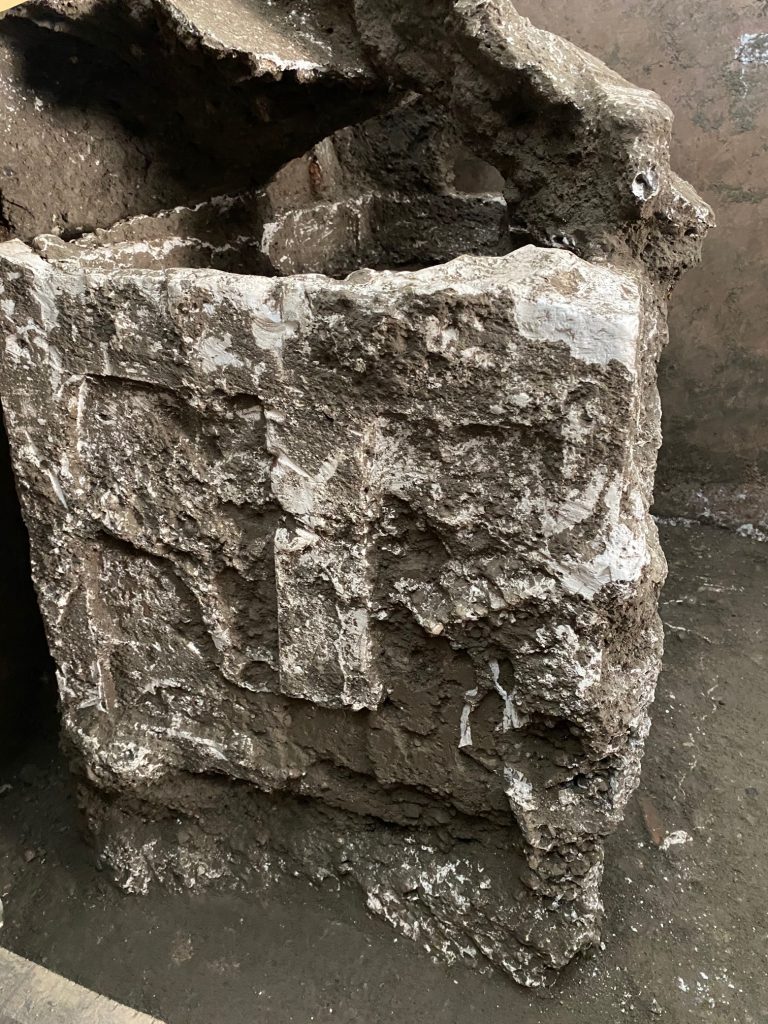 The chest held a small sigillata plate and a double-spouted lantern with a bas-relief depiction of the transformation of Zeus into an eagle. 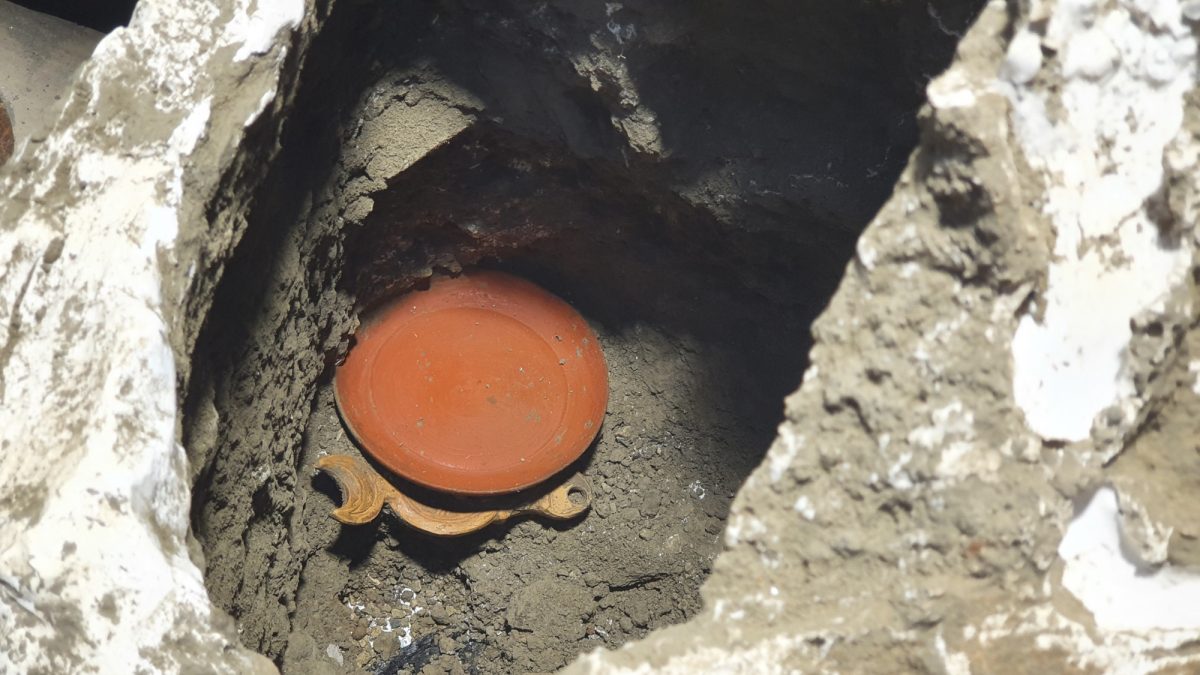 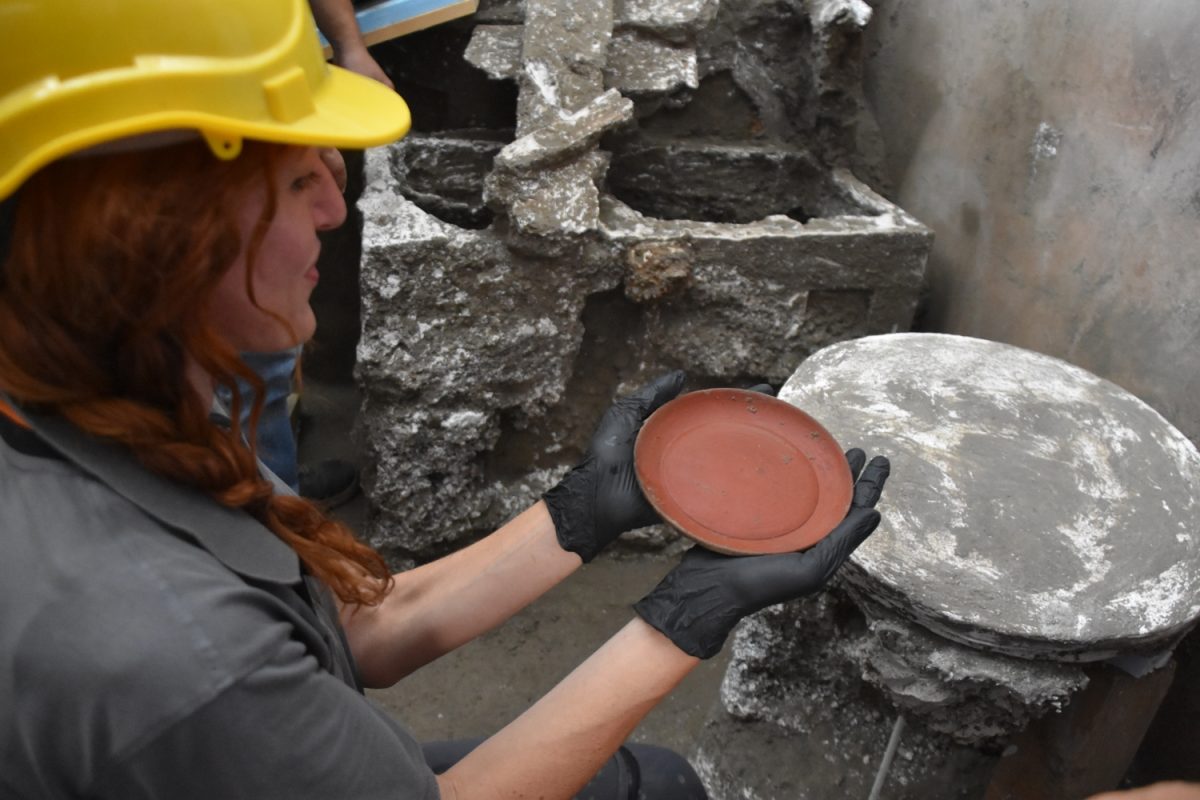 Next to it was a small, circular three-footed table, upon which was a ceramic cup containing two glass ampoules, a small sigillata plate and another small glass plate. At the foot of the table, a glass ampoule as well as small jugs and amphorae testify to the everyday use of the room. The furniture and ceramic vessels were found in the position they must have been left in when the owners fled, giving us a snapshot of that moment. 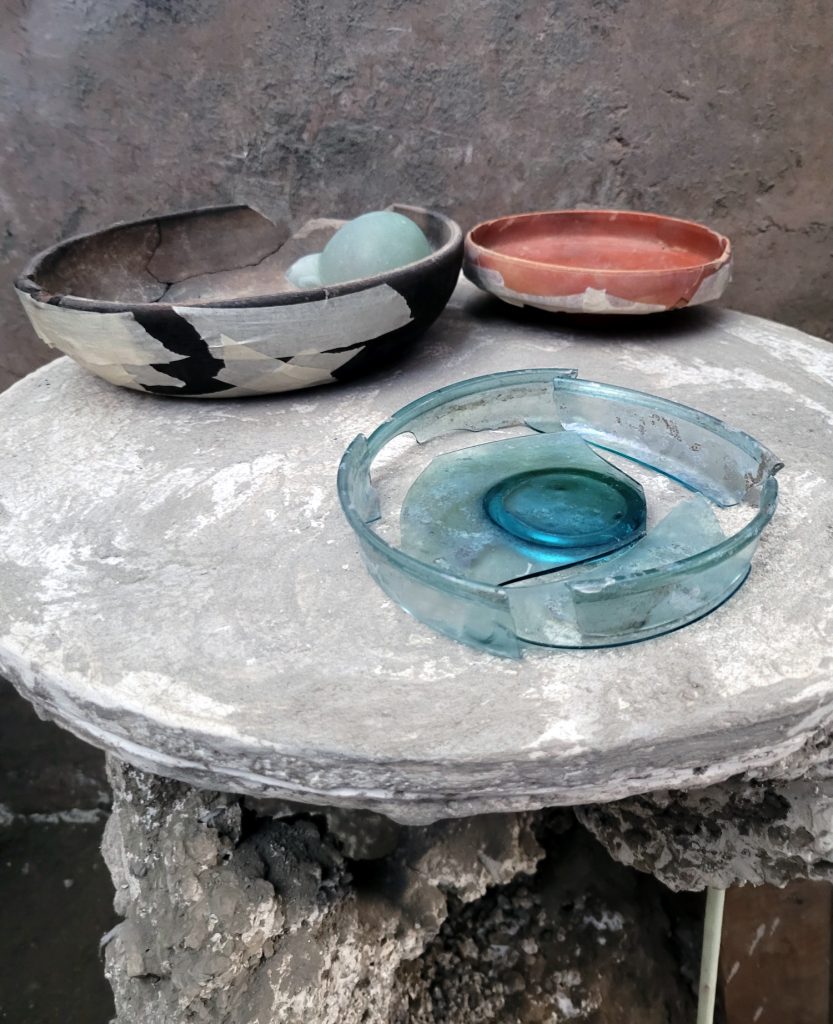 THE STORAGE ROOM WITH A WOODEN CABINET

The other excavated room seems to have been a form of storage room or warehouse. It is the only one of the rooms to not have plastered walls, and even the floor consists only of simple beaten earth.

It has been possible to create two casts, one of which yielded the barely perceptible shape of a shelf onto which the amphora had been crammed, while the second revealed a pile of wooden planks bound together with cords. The planks, made of wood of differing species, and of different sizes and finishes, were probably used for different purposes, from furniture to repairs on domestic and service buildings. 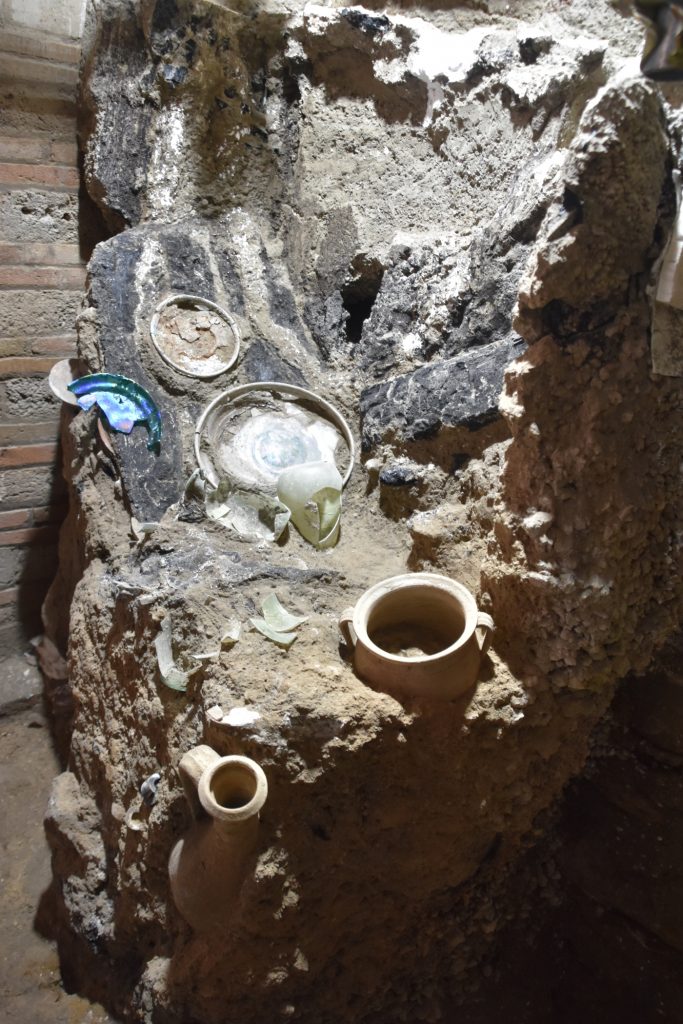 What is rather surprising however, is what it has been possible to recover outside the room, in the southern corner of the small hallway, in front of the kitchen.

Preserved within the cinerite was a wooden cabinet with at least four doors. The upper part of the piece, and the front doors, were compromised by the collapse of the ceiling above, with tiles, flooring and plaster which destroyed the upper levels, although their outlines can be perceived on the rear wall.

The piece of furniture in question is about 2 metres high, with at least five shelves. On the highest one, small jugs and amphorae, as well as glass plates, have been found, while the excavation of the lower levels is currently in progress.

THE ROOMS ON THE UPPER FLOOR – The waxed tablets, the incense burner 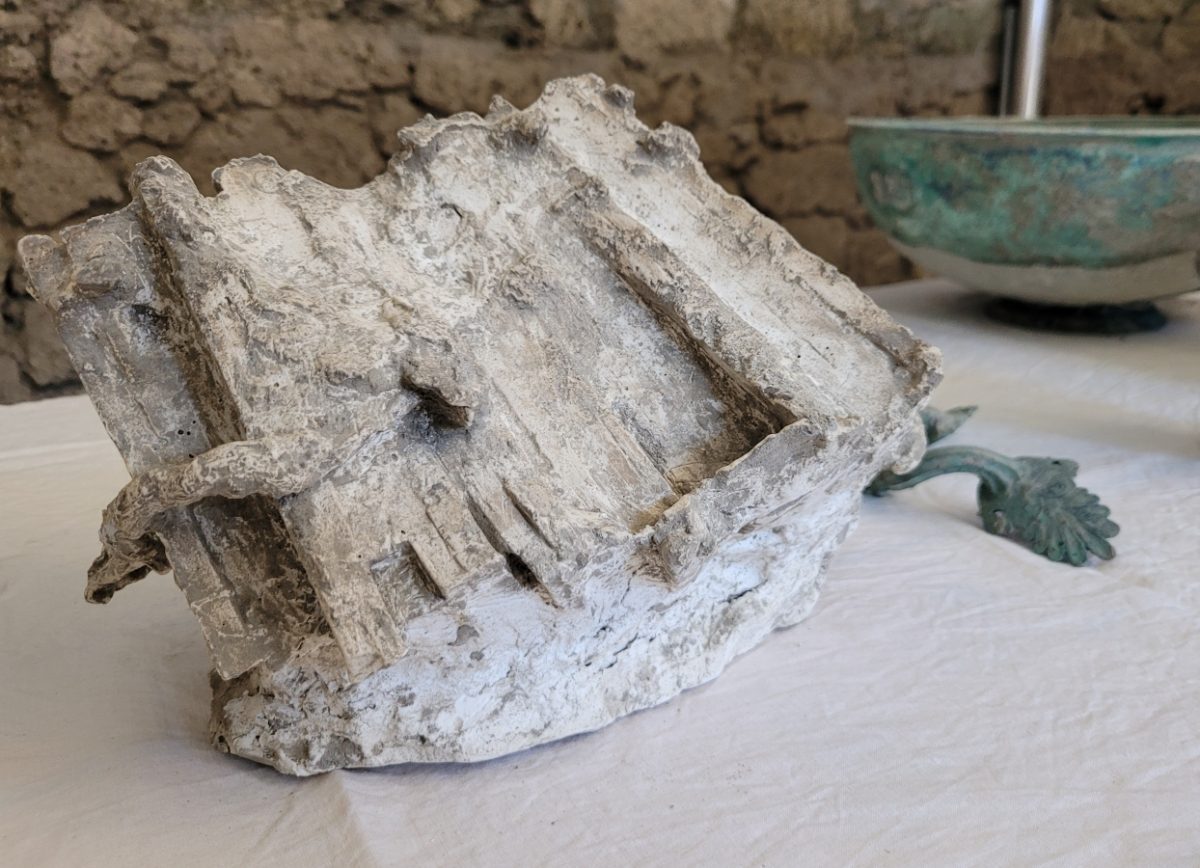 The upper rooms were excavated first, however the materials discovered were primarily found where they had fallen into the area of the rooms below.

Amongst these, of great documentary value is the small cast of the waxed tablets. A truly unique find, it has allowed us to create the first example of a cast which allows a perfect yield of both volume and detail. It is a group of seven triptychs, tied together by a small cord both horizontally and vertically. The polyptych had probably been stored on a shelf, together with other ceramic and bronze objects.

Discovered within a large cupboard which collapsed during the eruption were various other well-preserved ceramic vessels for everyday use in the kitchen and the canteen, but also vessels in sigillata (a type of Roman fine table ceramic) and in glass. Alongside this was a set of bronze vessels, among which a well-preserved pelvis (bowl) with a beaded base and handles with palmette attachments particularly stands out. There are in addition two bronze jugs, one of which features a handle with a sphinx-shaped attachment above and a lion’s head attachment below. 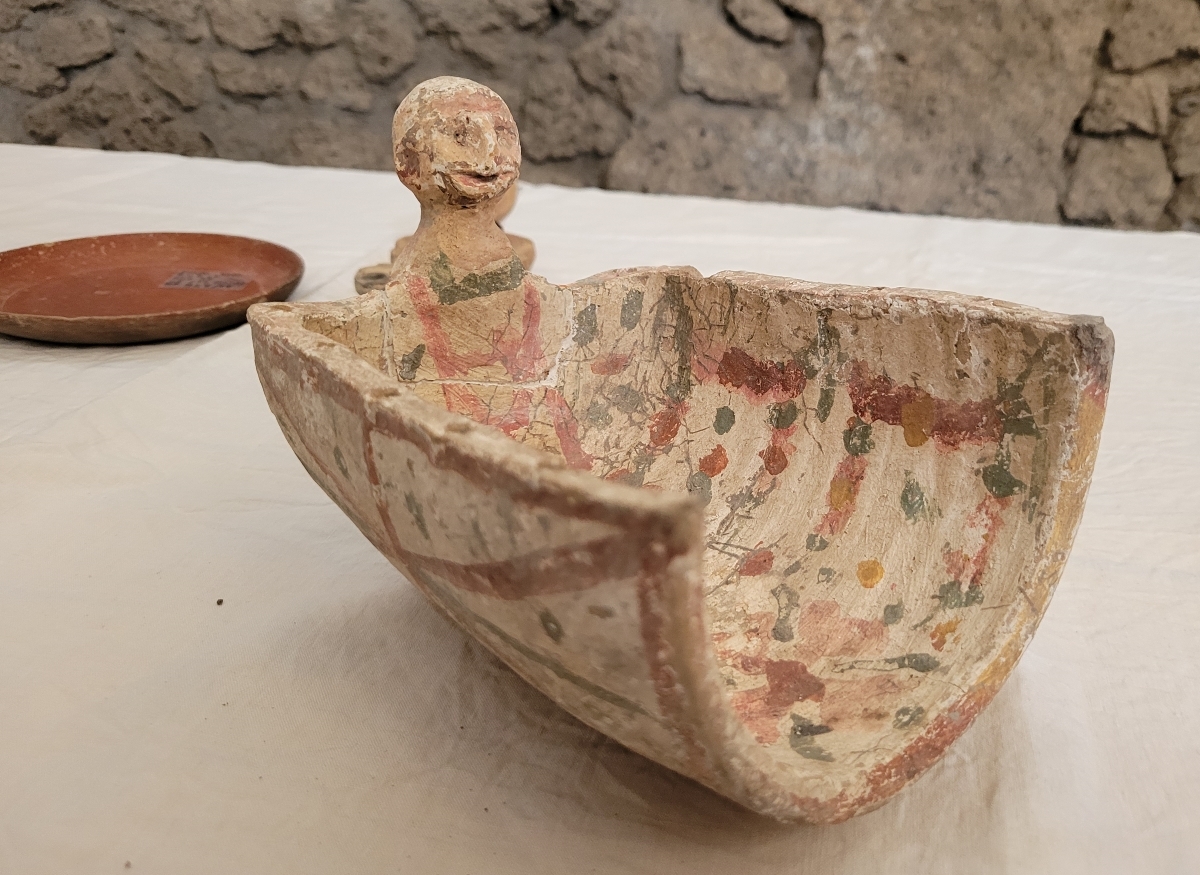 In addition to these metallic vessels, an incense burner in the shape of a cradle was discovered in excellent condition, with the polychrome pictorial decoration perfectly preserved, still revealing details such as the lips, beard and hair of the male subject, and geometric decoration on the exterior.

THE ROOM BEHIND THE HOUSE OF THE LARARIUM 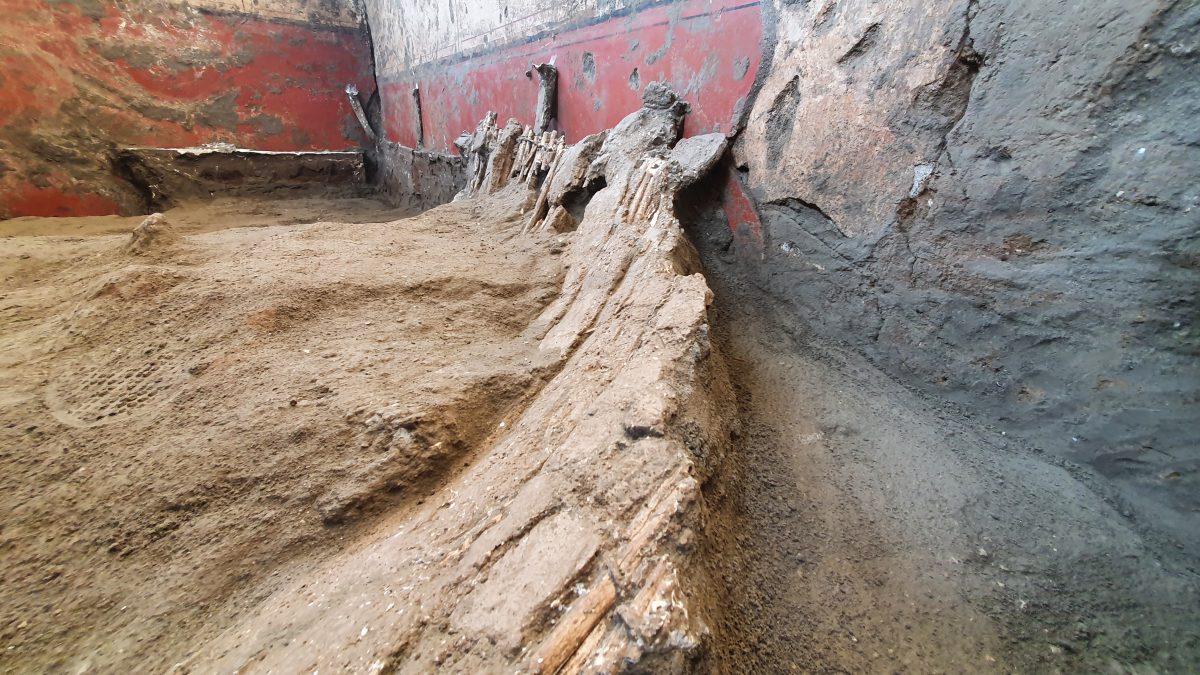 The various bundles of narrow laths can be seen, tied together by a thin cord and covered with a gauze that isolated them from the damp mortar. Using the same technique, it was later possible to obtain casts of what at the moment looks like boiserie along the walls north, east and south of the room. Some panels feature an engraved coffered decoration while others incorporate an intarsia decoration inlaid with small and thin bone elements, some of which are fortunately still in their original places.