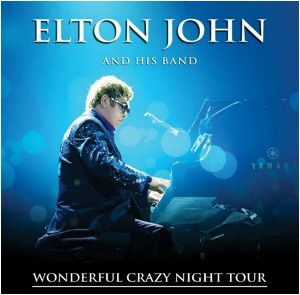 In the magical setting of Pompeii’s ruins, Sir Elton John and his band will host the third Italian concert of the ‘Wonderful Crazy Night’ world tour.

Tickets on sale on ticketone.it

Live at Pompeii The historic concert will be broadcast live, exclusively in Italy, on Rai Radio2 and in streaming on the website radio2live.rai.it, and on the Radio Rai app. It will also be possible to follow it via social networks.

During the tour, Elton John will perform legendary hits and classical pieces from his incredible 50-year career, including a selection of songs from his new album ‘Wonderful Crazy Night’. Elton John's band is formed by Nigel Olsson (drums), the musical director Davey Johnstone (guitar) both of whom were members of John's original three-man group, Matt Bissonette (bass guitar), John Mahon (percussion), and Kim Bullard (keyboard). John is undeniably one of the most praised and loved artists of all times, and his live concerts are regularly sold out all over the world. From the beginning of his career in 1969, John has performed over 4,000 times in more than 80 countries. He's one of the best-selling solo artists of all time, with 37 gold albums, 27 multi-platinum albums and 58 singles in the Billboard Top 40 in the US. In addition, he has sold over 250 million discs worldwide. John also holds the record for the best-selling single of all time. ‘Candle in the Wind’ was a 1997 hit that has sold 33 million copies. He holds the record for most hits in Billboard’s Adult Contemporary chart (His 2013 ‘Home Again’ single marks his 69 th entry in the chart). He has also written songs for hugely successful musicals and films such as ‘Billy Elliot: The Musical’, ‘Elton John and Tim Rice's Aida’, and ‘The Lion King’. Among the many honours and awards he has won there are five Grammy Awards, one Grammy Legend Award, a Tony, an Oscar, a Best British Male Artist BRIT Award, the induction into the Rock and Roll Hall of Fame and the Songwriters Hall of Fame, the Kennedy Center Honor, a Legend of Live Award, and twelve Ivor Novello Awards. He has also been knighted by Queen Elizabeth II for his contributions to music and charity. John was recently honoured with the BRITs Icon Award, recognising the very highest level of British music achievement, an award presented only to iconic artists whose writing, recording and performances have made a lasting impact on the nation’s culture.