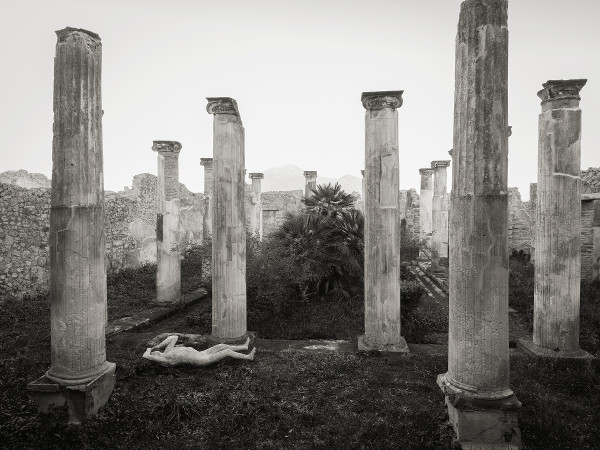 The exhibition presents 55 previously unseen photographs donated by the Japanese artist to the Fondazione Cassa di Risparmio di Modena, in a lyrical vision of what was left behind in Pompeii the day after the eruption in 79 AD.

Modena is continuing to forge a special relationship with photography. Now one of the top locations in Italy for this particular form of expression, it is capable of influencing the city’s whole cultural scene thanks to the contribution of institutions such as the Galleria Civica and Fondazione Fotografia Modena, which merged in 2017 to become Fondazione Modena Arti Visive.

From 6 December 2019 to 13 April 2020, Fondazione Modena Arti Visive is hosting a captivating exhibition dedicated to Pompeii, curated by Chiara Dall’Olio and Daniele De Luigi, at one of its venues: FMAV MATA – Ex Manifattura Tabacchi. The exhibition is co-promoted by Pompeii Archaeological Park which is lending some reproductions of the famous plaster casts of the victims of the eruption for the occasion and will then host the exhibition on site in Pompeii.

Headlining the exhibition is Japanese photographer Kenro Izu (Osaka, 1949), whose lasting fascination with the remnants of ancient civilizations has led to the creation of a series of images captured at the most important and best-known archaeological sites in the world, from Egypt to Cambodia, Indonesia to India, Tibet to Syria.