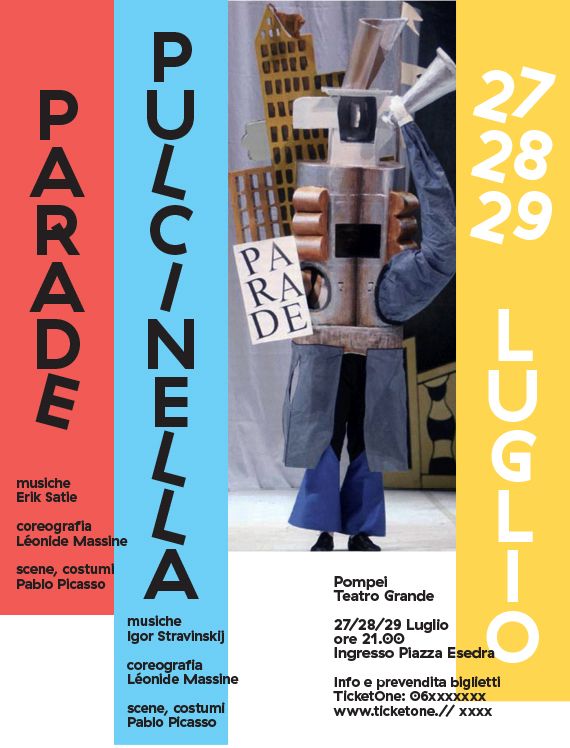 ‘Parade’ and ‘Pulcinella’ on stage
At the Teatro Grande in Pompeii with the Corps de Ballet of the Rome Opera House
In 1917 Picasso undertook a journey to Italy with Jean Cocteau to work with the Ballets Russes on ‘Parade’.
During his stay in Italy, the artist visited Rome, Naples and Pompeii.
To celebrate the centenary of Picasso's journey, the Ministry of Cultural Heritage and Activities and Tourism is hosting some important events and exhibitions, such as the recently concluded exhibition ‘Picasso and Naples: Parade’ at the Museum and Real Bosco of Capodimonte in Naples, and in the Antiquarium of Pompeii.

The Rome Opera House is one of the leading institutions of the celebratory event. A special occasion, ‘ An Evening of Parade and Pulcinella’, held in the extraordinary venue of the Teatro Grande, will be coming soon, promoted by the Archaeological Park of Pompeii in cooperation with Mondadori Electa.
From Thursday 27 th to Saturday 29 th July 2017, principal dancers Rebecca Bianchi, Claudio Cocino, Manuel
Paruccini, the Soloists and Corps de ballet of the Rome Opera House, directed by Eleonora Abbagnato, will make the characters and the magic of the ‘Parade’ and ‘Pulcinella’ ballets come to life.
The Ballet ‘Parade’ originated in Rome in 1917 masterfully orchestrated by the founder of the Ballets Russes, Sergej Djagilev, through the collaborative work of Pablo Picasso, Jean Cocteau, Léonide Massine, and Erik Satie who remained in France. The famous writer Guillaume Apollinaire described this cooperation as an Esprit Nouveau, and in the theatre programme he wrote, “Parade will change the ideas of a great many spectators.' Since the beginning, ‘Parade’ was considered a new and revolutionary ballet by its creators where for the first time the costumes were like three-dimensional sculptures dancing on stage and executing an innovative choreography with quick and abrupt movements.
The ballet was set in its present day era in a street in Paris where some circus and music-hall artists, namely a Chinese magician, a young American girl, and two acrobats, were performing in an attempt to attract an audience. ‘Parade’ shows everyday characters carrying out actions of contemporary life which set Massine's ballet apart since other ballets were mainly based on myths, fairy tales, and folklore. It had a strong impact on 20 th century ballet.
‘Parade’ premiered on 18 th May 1917 at the Théâtre du Châtelet in Paris, in the middle of the war, but the
audience did not understand its modernity, which aimed to capture the most insolent, common and lively aspects of human nature. The ballet was booed and called outrageous. The characters of the ballet performed dances very near to the popular entertainments, in stark contrast with the serious and sublime image of Russian dancers that dominated at the time. However, ‘Parade’ is not an example of variety show, but rather an artistic evolution of theatre. Its four genius creators, Picasso, Cocteau, Massine and Satie who were regulars at the circus, the cinema and the music halls, were the ideal choice to work on a project aiming at bringing some of the liveliness and authenticity of popular theatre into the world of ballet.
For this ballet, Picasso explored one of his favourite themes, the circus. He designed unconventional sets and costumes. Satie’s music included realistic sounds of daily-life. Cocteau played a key role in conceiving the project, writing the plot, taking part in every aspect of its artistic evolution, and enthusiastically involving Picasso and Satie in this adventure.
‘Parade’ was performed for the first time in Rome in June 1964 at the Teatro Costanzi by Maurice Béjart’s guest company ‘Ballet of the 20 th Century’ and then only on 6th February 2007 by the ‘Corps de Ballet of the Rome Opera House’.
‘Pulcinella’, a one-act ballet set in Naples, premiered on 15 th May 1920 at the Paris Opera, and Picasso’s “visual provocation” was immediately cheered by the audience. It was a three-man job: music by Igor Stravinskij, choreography by Léonide Massine, costumes and sets by Pablo Picasso. The idea stemmed from Diaghilev, Stravinskij, Massine and Picasso's experiences and recollections of their two journeys to Naples and their trip to Pompeii, in March and April 1917. The ballet took inspiration from the atmosphere of Naples’ alleys and markets, the charm of ancient Pompeii, and the great Italian tradition of the Commedia dell’arte. During their second journey, Picasso and Stravinskij, were fascinated by the expressive force of a theatre piece in the Neapolitan dialect, noticing how it was possible to overcome language barriers and captivate an audience using dynamic and popular creativity. The concept for the ballet was taken from a manuscript found in Naples’ National Library featuring the well-known figure of Pulcinella. The concepteurs started to work on the character of Pulcinella, revolutionising him. Stravinskij's music took a new direction and became the first neoclassical composition, based on themes by Giovanni Battista Pergolesi rewritten in a modern tone. Later, the Russian composer said that ‘Pulcinella’ had been his discovery of the past, the epiphany through which the whole of his later work had become possible. It had been a look backwards, the first of many love affairs in that direction, but also a look in the mirror. In order to compensate the lack of expressiveness of Pulcinella's masked face, Massine created highly pantomimic choreography that could
shape the body of the dancers in an expressive way.
In Naples he had watched many puppet shows featuring Pulcinella as the main character, and he had been
especially fascinated by the continuous changes in his gestures.
Picasso's sets were a breakdown of rectangles, squares and trapezoids, according to the geometric forms of Cubism, in cool shades to enhance the bright colours of the costumes.
‘Pulcinella’ was performed for the first time in Rome in the Teatro Costanzi by the Ballets Russes on 30 th January 1921.
Léonide Massine's choreography has been revived by his son Lorca Massine, a world-renowned dancer and choreographer, who has always upheld his father’s artistic tradition and who has always had a special relationship with Rome Opera House, where he was director of the Ballet company between 1981 and 1983. Anna Krzyskow and Manuel Paruccini are assistant choreographers. Pablo Picasso’s set designs have been reconstructed by Maurizio Varamo, and his costumes by Anna Biagiotti. All is ready to be staged at the Rome Opera House with lighting arrangement by Mario De Amicis and pre-recorded music.