Home » Oplontis » History of the Excavations

History of the Excavations 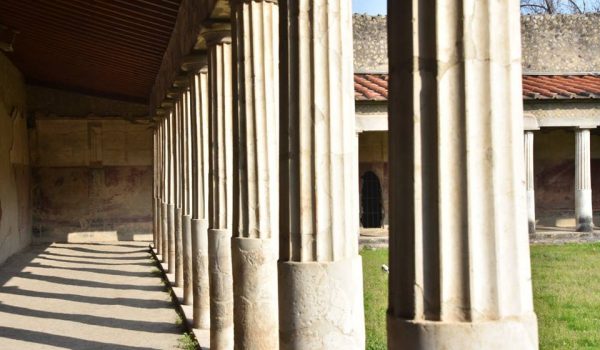 Impressive archaeological remains belonging to the site of the ancient Oplontis can be seen in the heart of the modern town of Torre Annunziata. The name Oplontis had only ever been mentioned in the Tabula Peutingeriana, a medieval copy of an ancient map of the roads running through Italy at the time of the Roman Empire. In this map, the site of Oplontis is related to a cluster of buildings located between Pompeii and Herculaneum.

Since 1997, the Oplontis excavations were listed as a UNESCO World Heritage Site. They include substantial parts of buildings that stood in a suburban area west of Pompeii.
The site of Villa A in Torre Annunziata, in the village of Mascatelle, was discovered by chance at the end of the 16th century, during the construction of the Conte di Sarno Canal which is still in existence at the southern boundary of the archaeological area. Despite this, the excavation only began in the 18th century. It was conducted in 1785 by the military architect Francesco La Vega but was abandoned due to the putrid air forcing the closure of the tunnel which had been opened at the Sarno Canal.
Some decades later, in 1839, a small open-air excavation was carried out in the area of the peristyle, in the slave quarters. From here, some narrow tunnels running to the area east of the villa were dug. This excavation was interrupted due to lack of funding, but the archaeological importance of the site was acknowledged, and it was acquired by the Bourbons with a protective measure that allowed its preservation to date.
The systematic excavations of the villa, apart from some desultory discoveries near Via Murat, began in 1964, on the initiative of local enthusiasts. Thus, in about 20 years, it was possible to bring to light, albeit not in full, a large complex with over 90 rooms.
In 1974, the remains of a second impressive building were found about 300m east of villa A during the construction works for a gym in the ‘Giuseppe Parini’ Junior High School. This building, developed around a two-storey peristyle, was the so-called Villa B. The large two-storey structure occupied one sector of the settlement. It was bordered to the north by a road which had several other buildings facing onto it all of which are still buried below the modern town.
Other remains of the ancient Oplontis have emerged from the modern urban fabric over time. Among them, particularly significant are the rooms of the baths near Capo Oncino, below the current Nunziante Thermal Baths, and the recent discoveries in Via Andolfi all of which have revealed important archaeological and epigraphic traces of Pompeii’s suburban area.