Pompeii after the Eruption 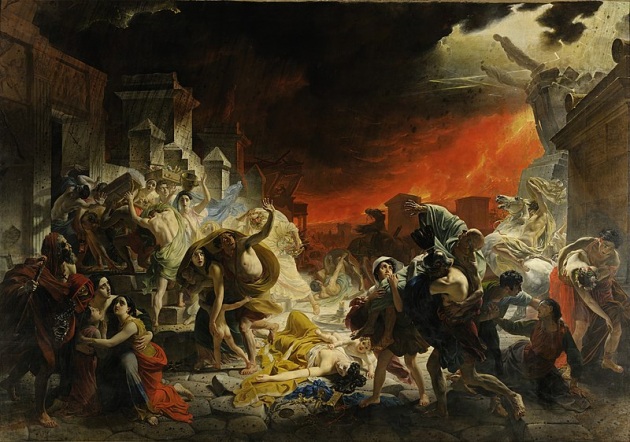 After the catastrophe of AD 79, when Vesuvius buried two entire cities and all of the land between its western and southern slopes and the sea, including the fertile Sarno plain, the Emperor Titus charged two magistrates with overseeing relief in Campania. He also, as reported by the historian Suetonius, assigned the assets of those who had died without heirs in the eruption to the reconstruction of the destroyed cities. However, given the seriousness of the situation, as much was recovered as possible and the sites were abandoned.

The surviving Pompeians recovered part of their possessions and precious furnishings from their houses, while over the following centuries a succession of thieves descended upon the city, often randomly digging tunnels below the layer of consolidated ash. These actions were frequently reported in later excavation papers, and their traces can still be observed today – namely, the sequence of breaches which were made in the walls of looted rooms. The area of the city became a large quarry of materials (marbles, stone blocks and lead), as is clear from the removal of the marble coating of the Suburban Baths, in the Forum and many dwellings, the disappearance of marbles and of stone blocks from the seating in the theatres and the Amphitheatre, as well as the absence of the accumulation tanks and the water pipes on the aqueduct towers.

The Civita hill, which was covered in eruptive material, from which parts of the upper floors of buildings emerged, became an uninhabited site, though one where man returned to cultivate, and use the area as a burial ground. In certain cases, the structures which emerged were re-used for other purposes, such as in the case of the bakery which was constructed in a vaulted room which faces onto the southern crag of the plain, or the structures which were built over the Women’s Forum Baths. Along the restored road outside the city, several buried structures were also unearthed and repurposed. The most significant case is that of the Moregine baths, which were discovered during the construction of the Naples-Salerno motorway on the southern outskirts of modern Pompei: the building had been partly reused, with the laying of a clay slab floor over the ash layer from the eruption of AD 79, until another eruption buried it, causing the permanent abandonment of the complex.

At the end of the sixteenth century, in order to channel water from the Sarno mountains to his pasta factories at Torre Annunziata, Count Muzio Tuttavilla had the architect Domenico Fontana construct a canal which crossed the entirety of the Civita hill, and thus the ancient city, without realising the true value of the structures, objects and inscriptions which were revealed during the excavation.

The time was not yet ripe, and needed to wait until 1748, the year in which King Charles III of Bourbon, after ten years of explorations at Herculaneum, decided to excavate on the Civita hill, where structures had emerged. Excavations would continue in alternating phases under his successors, under the French dominion and the subsequent phase of the Bourbon Restoration. The state continues to take care of them today, as it has since the Unification of Italy.