“Yet Pompeii, today more than ever, has need of its Antiquarium. The gradual expansion of the excavations, the preciousness and uniqueness of certain discoveries, the duty, the inescapable duty, to defend all that cannot be kept outside from atmospheric agents and dangers, if not from the ill-will of men, and finally the usefulness of presenting materials grouped together and categorised, which are not to be found in the houses …”

The Antiquarium of Pompeii was built by Giuseppe Fiorelli between 1873 and 1874 in the area below the terrace of the Temple of Venus, overlooking Porta Marina. It was the exhibition venue for a selection of finds originating from Pompeii which were representative of the daily life of the ancient city, as well as for casts of the victims of the eruption.

In 1926, it was expanded by Amedeo Maiuri, who as well as adding large maps indicating the updated developments of the excavations since 1748, and enhancing the collection with new finds from the Villa Pisanella of Boscoreale as well as more recent excavations of Via dell’Abbondanza, laid out a route which guided the visitor through the history of Pompeii from its origins until the eruption.

The building was seriously damaged by bombing during the Second World War in September 1943, but thanks to the restoration works under Maiuri, on the 13th June 1948 it reopened to visitors as part of the celebrations of the second centenary of the excavations of Pompeii. Damaged again, this time by the 1980 earthquake, it closed to the public.

In 2016, after thirty six years, it was reopened to the public in the new guise of a visitor centre and museum venue.

On the 25th January 2021, the Antiquarium was inaugurated with a new layout, and has become a museum venue dedicated to the permanent exhibition of finds that show and narrate the story of Pompeii. It has been completely refurbished, taking inspiration from what was the museum concept of Amedeo Maiuri, and by means of the most significant finds, traces the history of Pompeii from the Samnite era (4th century BC) until the tragic eruption of AD 79.

In addition to the most famous artefacts from the immense heritage of Pompeii, such as the frescoes of the House of the Golden Bracelet, the Moregine Silver Treasure and the triclinium of the House of Menander, finds unearthed by the most recent excavations undertaken by the Archaeological Park are also displayed, including fragments of First Style stucco from the fauces of the House of Orion, the amulet treasure from the House with the Garden and the recently produced casts of the victims from the Civita Giuliana villa.

The visit to the Antiquarium is also accompanied by two forms of digital media: a web-bot – a digital assistant able to provide simple and clear service information, and an audio narration which accompanies the visitor from the exhibition route to the discovery of several points of interest within the Archaeological Park of Pompeii.

Summa Pompeiana
The discovery of Pompeii in 1748 leads to a new image of Antiquity, which tells us about daily life. In 1786, overcome by surprise at how everyday that discovery was, Goethe exclaims: “There have bee many disasters in the world, but few have brought as much joy to posterity. I think that it would be difficult to see anything more interesting”. For the first time ever, Pompeii provides the possibility of being in a medium sized town in ancient Italy, inside houses with walls decorated with frescoes that either reproduce simple architectural partitions or recount myths, and with marble tables on which the owner once displayed his own most precious objects.
These are biographies of objects and of men whose journeys through life we are able to follow right to their portraits being laid on their own tombs 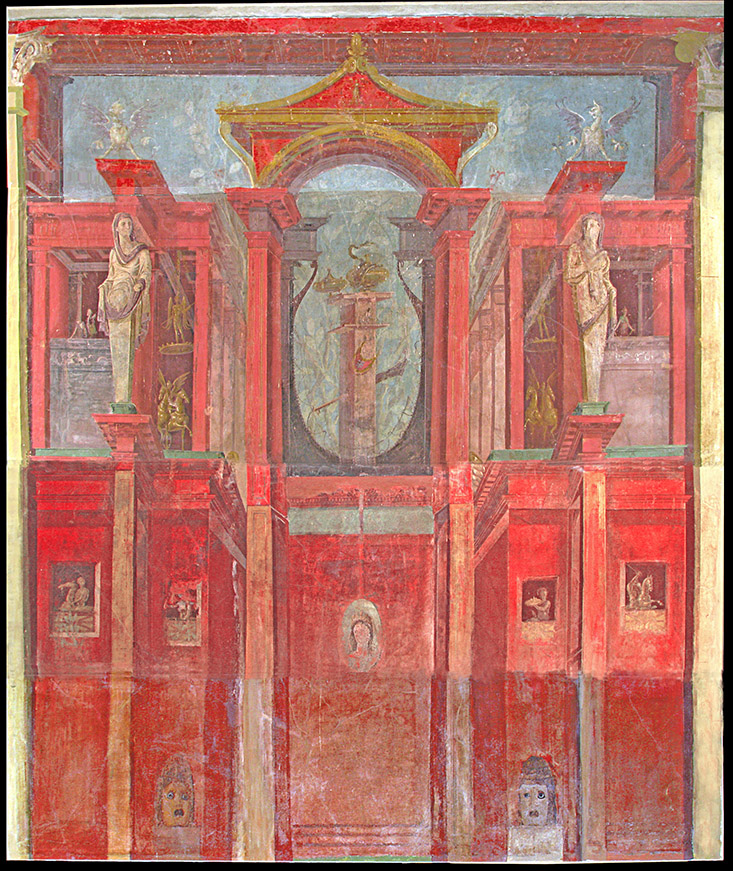 During the archaic period (7th-6th cent. BCE) Pompeii underwent considerable urban development, thanks to the strong influence from the cities of Magna Graecia and the Etruscan towns that were in the region of the Bay of Naples. Extensive public areas such as the main square were levelled off, temples were constructed (the sanctuaries of Apollo and of Athena, near the Triangular Forum), houses were built and the town was defended by a wall that was over 3 kilometres long. The 5th cent. BCE coincided with a period of deep crisis: the temples were not visited, the walls were abandoned and there was a significant drop in the population. That crisis affected almost the whole of central and southern Italy and was also due to new peoples coming in from the Apennine region, including the Samnites, who settled in Pompeii and in the Valley of the Sarno. 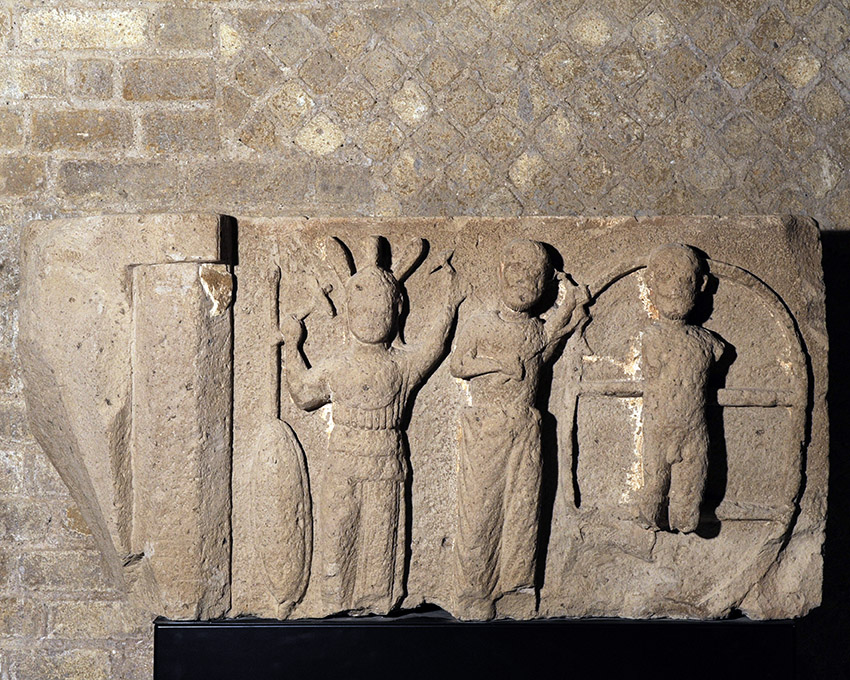 The phase of alliance with Rome

In 308 BCE, two years after its own territory had been destroyed by the Romans, the cities in the Sarno Valley concluded a treaty with Rome: these facts, as told by the Roman historian Livy, provide the first historical evidence concerning Pompeii. Its admission as one of the federated cities coincided with considerable building activity, which is reflected in the renovation of the Doric Temple and re-newed devotion to the cult of Apollo, and especially by the construction of a new surrounding wall, built with the embankment system (ad agger) also used in Rome. From the early decades of the 3rd cent. BCE, the Pompeii we all know began to develop, with its streets – simple beaten tracks at that time – its public buildings and its houses. 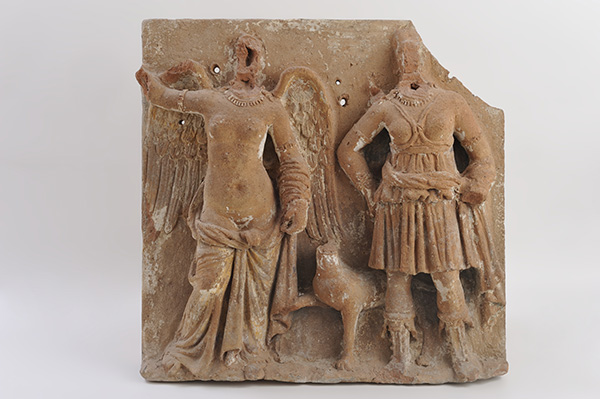 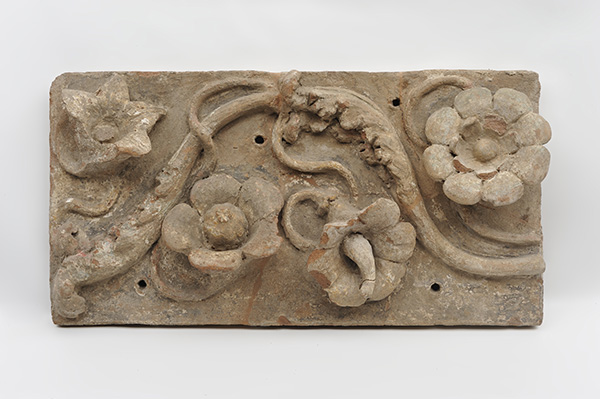 The “golden century” of Pompeii

The 2nd cent. BCE can be called the “golden century” of the town. Following the phases of the Roman conquest in the East, groups of traders from the coastal towns of Campania reach the main ports of the Mediterranean: Delos, Rhodes and Alexandria. Like the other important towns of Campania, Pompeii also renovated and multiplied its own monuments in a few decades. Near the Doric Temple were built a theatre, several temples for foreign cults – including one to Isis of Egypt and a series of buildings intended for the physical, cultural and military education of the local élite, such as the Samnite Palaestra and the domus publica. A short distance away, the oldest thermal bath of the town was built: the Stabian Baths. The sanctuary of Apollo in the Forum was completely rebuilt and around the square, surrounded by shops, new large constructions appeared, inspired by those in Rome: the Temple of Jupiter, the Basilica and, slightly further away the public market (macellum). .

During the course of the harsh and bloody Social War (91-89 BCE), when Rome fought against her Italic allies, Pompeii sided with the coalition of rebels and from ancient sources we know that Silla attacked the town in 89 BCE. Archaeology shows us the igns of this siege: along the north-west sector of the town walls, the holes left by the projectiles hurled from catapults are still visible. A precious set of inscriptions, written in Oscan, documents the defence system set up by the citizens of Pompeii: chosen troops were arranged as defence in each sector of the outer walls and the auxiliaries were grouped together near the main public areas and along the routes indicated by the names of the ancient streets of Pompeii, such as the víu sarinu (Via Salaria) and the víu mefíu (Via Mediana). 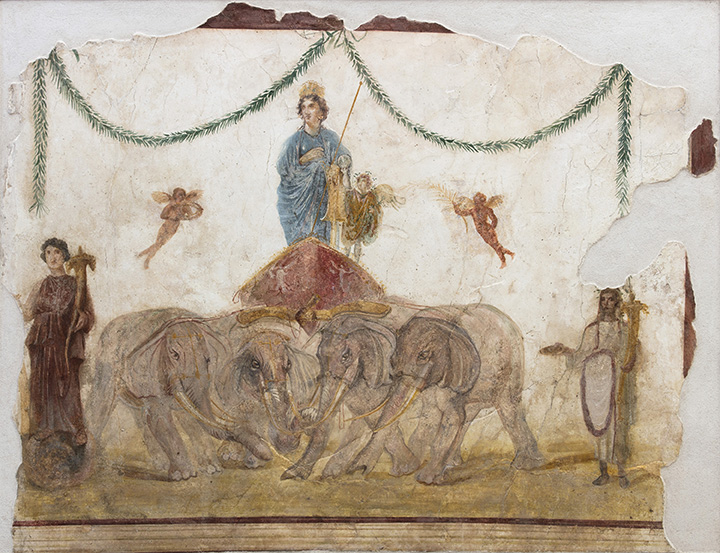 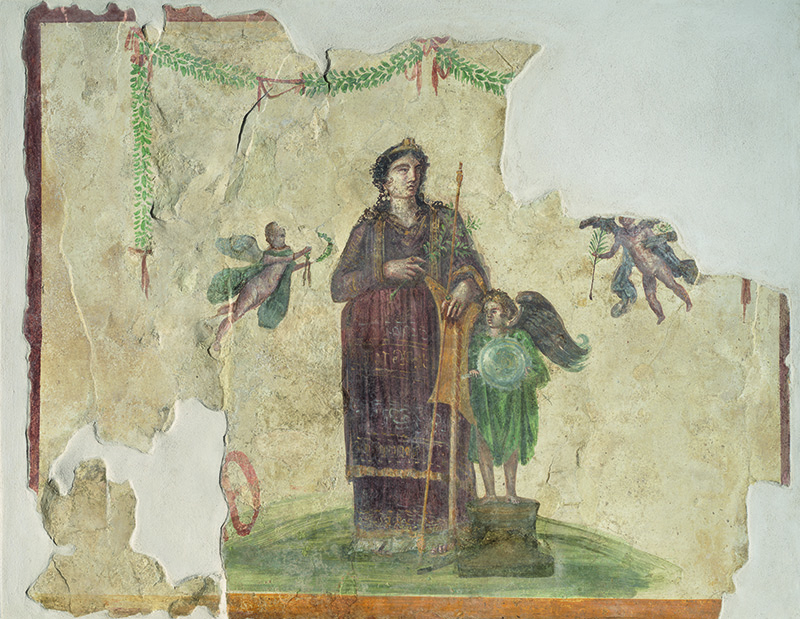 The loyalty of Pompeii to the new power system created by Augustus and his successors was celebrated by a series of monuments on the eastern side of the Forum, built by magistrates and powerful local personalities, often women as in the Building of Eumachia. Not far from the square, the Macellum was renovated, a meeting-place for the powerful assembly of the Augustales and the Temple of Fortuna Augusta was built on private land. At the opposite end of the town, the huge Large Palaestra was intended for the physical and cultural education of the youth of Pompeii. The ancient theatre was modernised, and the architect M. Artorius Primus boldly defined a space that was both for games and for sacred use, in which the gigantic statue of Augustus took centre stage. The same thing happened to the Temple of Venus, rebuilt as a place celebrating the origins of the gens Iulia. 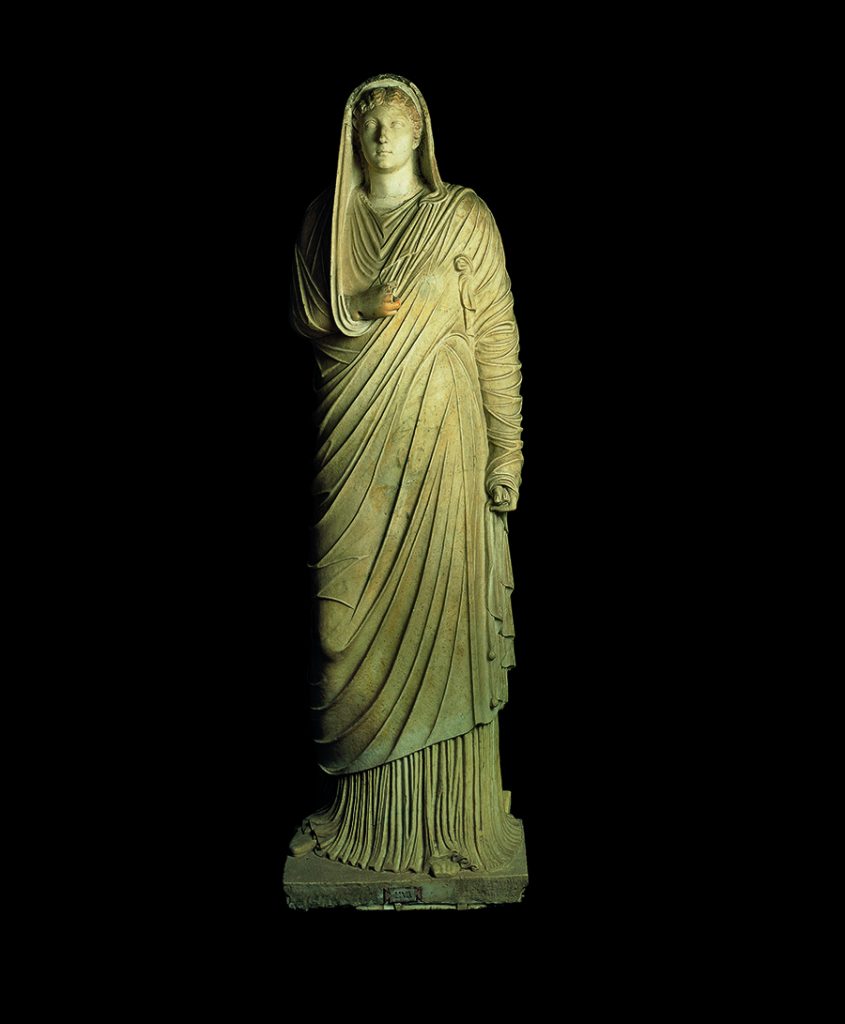 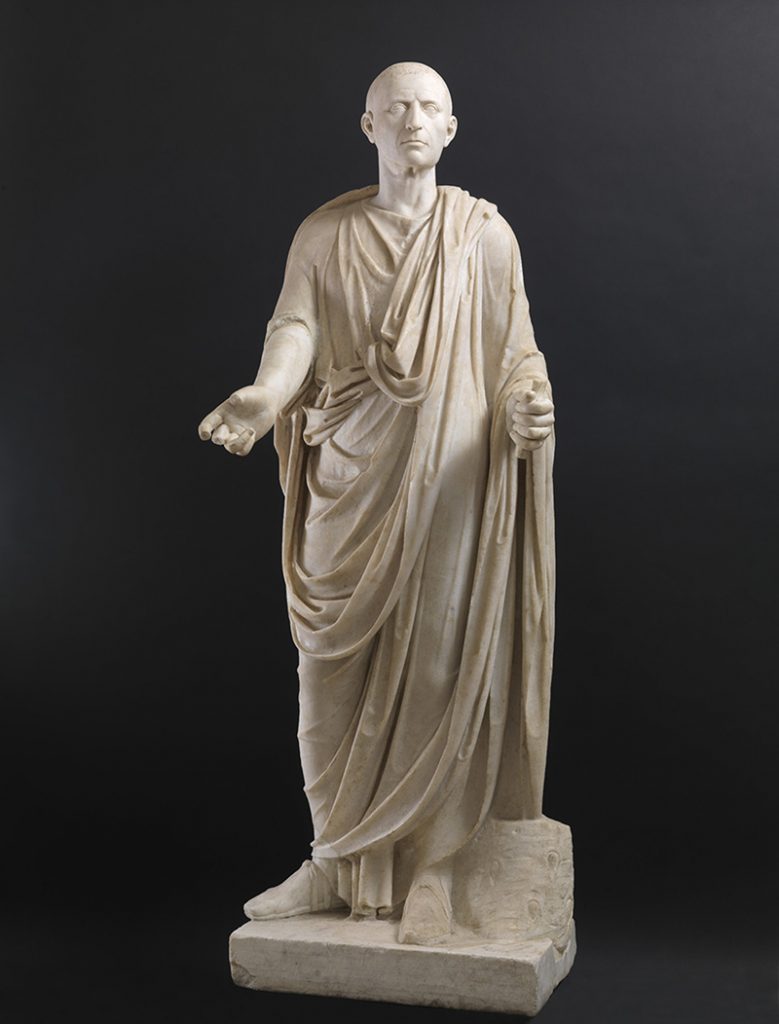 During the Julio-Claudian dynasty (27 BCE-68 CE) Pompeii enjoyed a direct relationship with the imperial court that, under Tiberius and Nero, stayed in the region of the Bay, between Capri and Baia, for long periods. A graffito may record that one of the wives of Caligula stayed in the town and Suetonius reports that a son of Claudius was found dead there during a tragic children’s game. All these influential personalities and the local ruling class lived in rich town houses (domus; the most famous is the one of the Menander, that belonged to a branch of the family of Poppea Sabina, Nero’s wife) and in aristocratic villas scattered on the slopes of Vesuvius or facing the sea. In 58 CE Tacitus records that a huge brawl broke out in the amphitheatre, in which the Nucerini fought with people from Pompeii, resulting in scores of dead. This episode prompted harsh repression from the Roman Senate, which forbade gladiatorial combats in the town for 15 years.

The few firms of bricklayers (structores) or decorators (pictores) present at the time of the earthquake cannot have been sufficient for the enormous task of reconstructing the town. After removing the debris, scores of specialist firms had to be involved, coming from other towns that had suffered less or had even emerged unscathed from the earthquake. And all these skilled workers, comprising slaves, paid workmen, architects, bricklayers, painters and mosaicists, must have had to stay in the town for some time or commute daily from neighbouring villages. Besides, they all had to eat, sleep and rest. The town had now doubled in size and so taverns, restaurants and lodgings had to be built: in a word, the Pompeii we know today when visiting its main streets.

Before the eruption, Vesuvius looked like a fertile mountain, its slopes occupied by rustic villas devoted to the production of wine. Convinced that they were in a place protected by the gods, the inhabitants of Pompeii lived without considering that they were on the edge of a volcano. As recent studies and discoveries suggest, on the 24th of August or October, in 79 CE, Vesuvius pours down a rain of lapilli and stone fragments onto Pompeii: the eruption lasted until the next day, causing roofs to collapse and mowing down the first victims. The people of Pompeii tried to take refuge in houses or put their hopes in flight, walking over the bed of pumice that was accumulating, now almost 2 m. high. However, at 7.30 on the following day, an extremely violent release of toxic gas and glowing ash devastated the town: it penetrated everywhere, taking anyone attempting to escape by surprise and making any kind of defence useless. A rain of extremely fine ash, forming a deposit of 6 m thick, adhered to bodies and to folds in their clothes and blanketed absolutely everything. And two days later, when the fury of the elements had abated, the whole area looked completely different: everything was wrapped in a white blanket.