Alleys and frescoed domus emerge from the new excavations in Regio V, and reconfigure the urban spaces of the ancient city of Pompeii. Among the latest discoveries are three electoral inscriptions, additional frescoes in the House of the Dolphins, and a precious candelabrum from a living room in the House of Jupiter.

Starting from Via di Nola and moving north, the following rooms/areas have been identified in succession:

A productive structure which was perhaps a small fullonica (laundry), which overlooks the Via di Nola entrance

At a higher level, there is a wide open space which was likely a garden, with some amphorae still in situ (at the time of discovery). A small fluted column was found at the centre of the garden, along with a large piece of a marble slab, which probably once supported a stone basin (labrum), later reused as a form of table top.

Some tree roots have been identified via the plaster cast technique. The garden borders the House of the Attic (Casa della Soffitta) to the east and the alley recently christened as the Alley of the Balconies to the west, while it is bordered to the north by what appears to be a portico, with at least three columns and some pillars with traces of fresco to the rear, which is emerging. 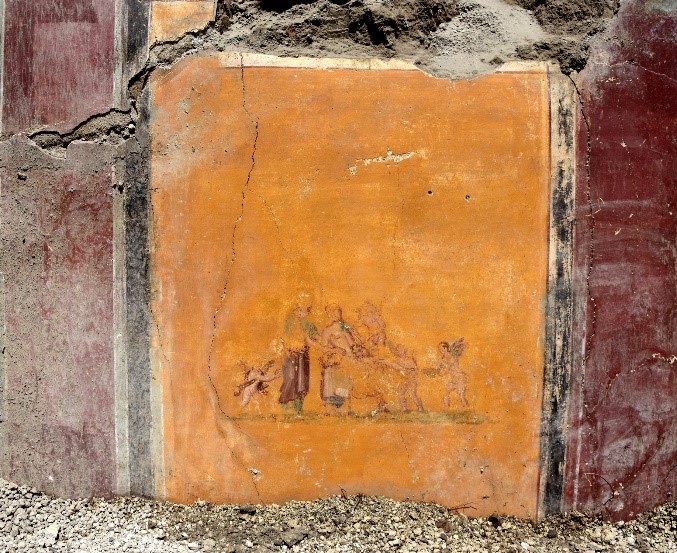 THE ALCOVE and THE FRESCO OF THE WOUNDED ADONIS

To the west there is a room that has yielded the sole mythological painting identified so far in the wedge, depicting the wounded Adonis with Venus and cupids. The room was most likely a cubiculum (bedroom), due to the presence of a recess on one side made to fit the head of a bed. 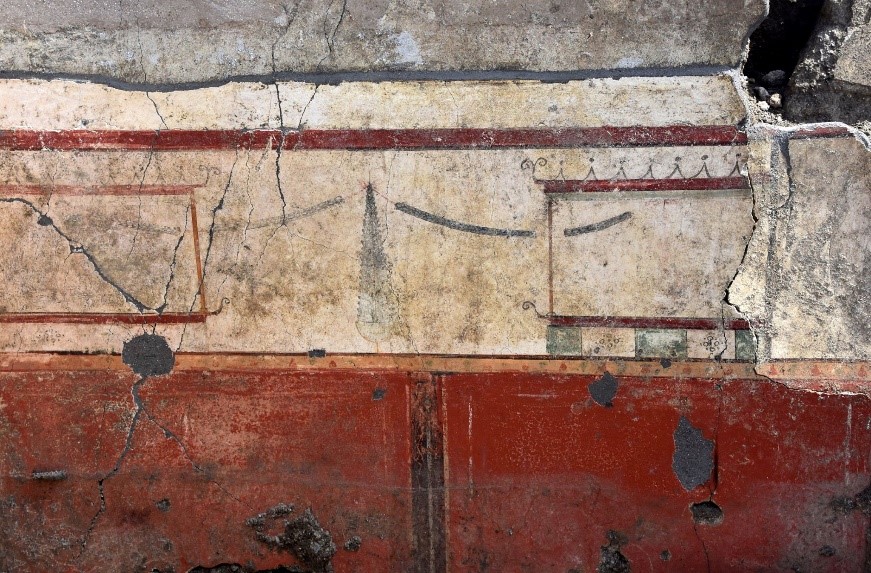 THE ROOMS OF THE HOUSE OF JUPITER

In the western sector of the wedge, a series of rooms are under investigation that are likely connected to the House of Jupiter, which was already partially excavated in the nineteenth century (immediately to the South and East of the House of the Silver Wedding).

The still ongoing investigations have allowed us to identify a large scale excavation dated to the eighteenth century, or the early years of the nineteenth century, with a circular ditch from which various tunnels branch off.

It already seems possible to recognise the entrances (fauces) on Vicolo dei Balconi, and an atrium onto which various rooms seem to face. Two rooms face onto the colonnaded garden (peristyle) of this house, one to the South richly decorated in the First Style, with squares and stucco frames, and another to the North decorated in the Third Style, in which we can recognise a pair of birds at the centre of a frame.

Even if it had already been the focus of an exploratory trench and a tunnel dating back to the first modern investigations, an elegant bronze lamp-holder was discovered on the floor in a corner of this room, which has only been partially excavated. 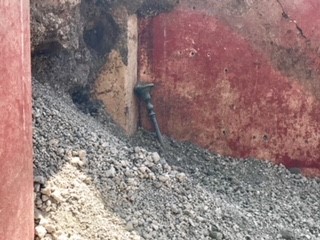 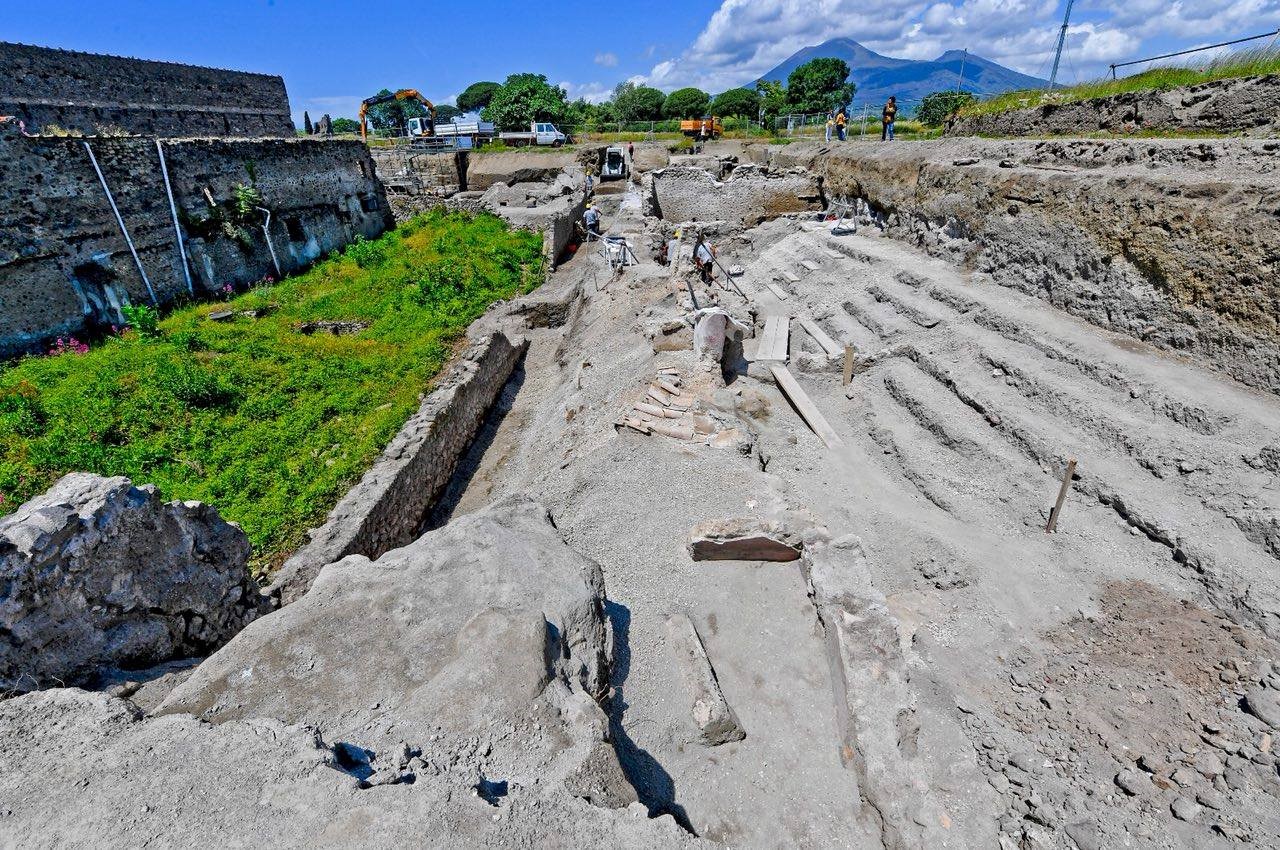 THE ALLEY OF THE BALCONIES

The excavation of the northern sector of the Alley, which runs alongside the wall of the garden (viridarium) of the House of the Silver Wedding on one side, has been particularly full of surprises. On the other side, the remains of 4/5 balconies have emerged in good condition (from which the designation of Alley of the Balconies comes).

Various intact amphorae have been found on some balconies, some of which had probably been overturned as if to dry out.

The balconies have been preserved due to the fact that when they collapsed, the alley was already covered with lapilli, onto which the bottom of the balconies ‘rested’. 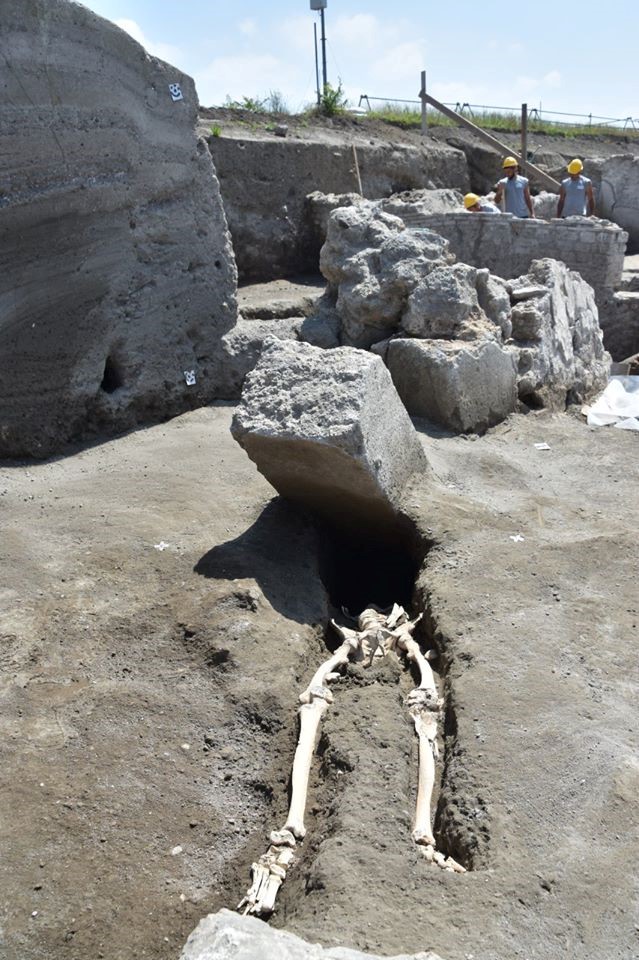 THE SKELETON OF THE FUGITIVE

In the northern sector, at the crossroads between the Alley of the Balconies and Vicolo delle Nozze d’Argento, the skeleton of a fugitive has been found.

From initial observations, it would appear that the individua l survived the initial eruptive phase, before venturing out in search of salvation along the alley, which by that point was blanketed by a thick layer of lapilli. The body was indeed found at the height of the first floor of the adjacent building, and thus above the lapillus layer. Here he was struck by the thick and dense pyroclastic flow, which hurled him backwards.

A formidable stone block (perhaps a door jamb), violently thrown by the flow, struck him in the upper body, crushing the upper thorax and the head.

The individual clutched at least 20 silver and 2 bronze coins close to his chest, stored in a small purse. While the remains of the victim were gradually being removed to be taken to the Laboratory of Applied Research at the Archaeological Park of Pompeii, in order to continue the investigation, sure enough a precious find in the form of 3 coins was initially found between the ribs. 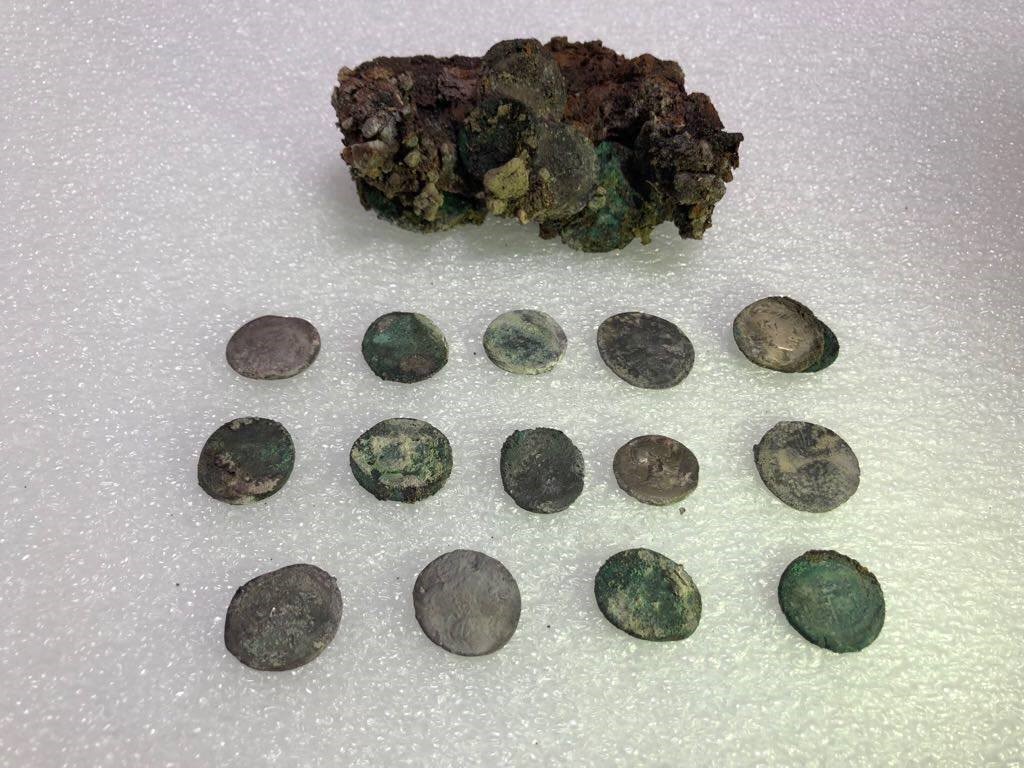 At first glance it would appear that twenty silver denarii and two bronze asses with a nominal value of eighty and half sesterces have been found. Such a quantity of money at the time could maintain a family of three for 14-16 days.

It has been possible to examine 15 - mostly Republican - coins, dating from the middle of the 2nd century BC. One of the latest Republican coins is a legionary denarius of Mark Antony, commonly found at Pompeii, with the indication of the XXI Legion. Among the few Imperial coins identified, we have a likely denarius of Octavian Augustus and two denarii of Vespasian.

On the North-West side, three electoral inscriptions were found in a perfect state of preservation. 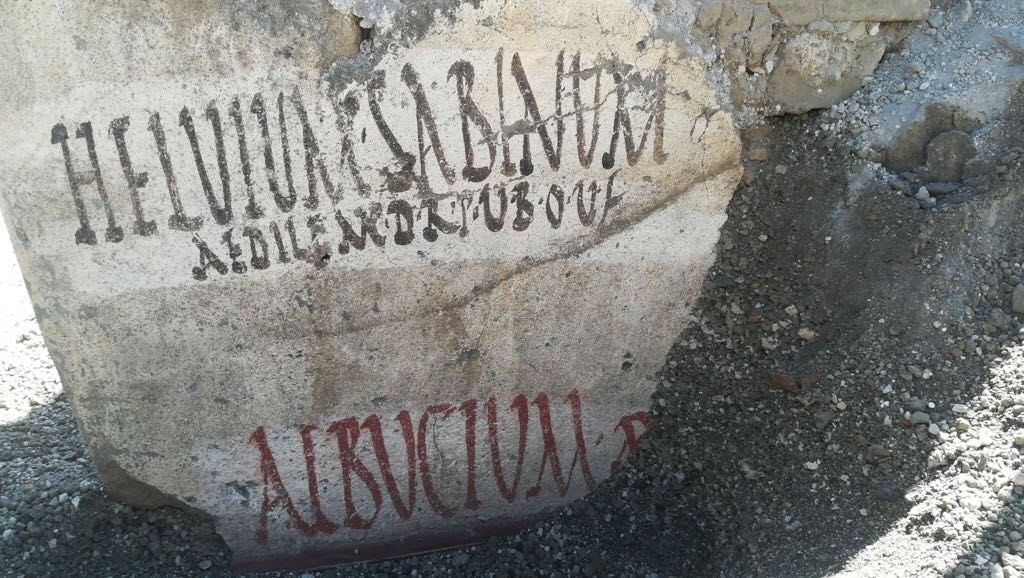 On the East wall: On the South wall:

L(ucium) Albucium aed(ilem). This last inscription perhaps continues below, in the area still covered by lapilli.

The Albucii were probably the owners of the House of the Silver Wedding.

It is worth noting that the inscriptions were created on a layer of white paint, perhaps spread over it to cover earlier writing, and in any case to ensure a standard writing surface for the preserved inscriptions, which related to the last elections held in Pompeii before AD 79. 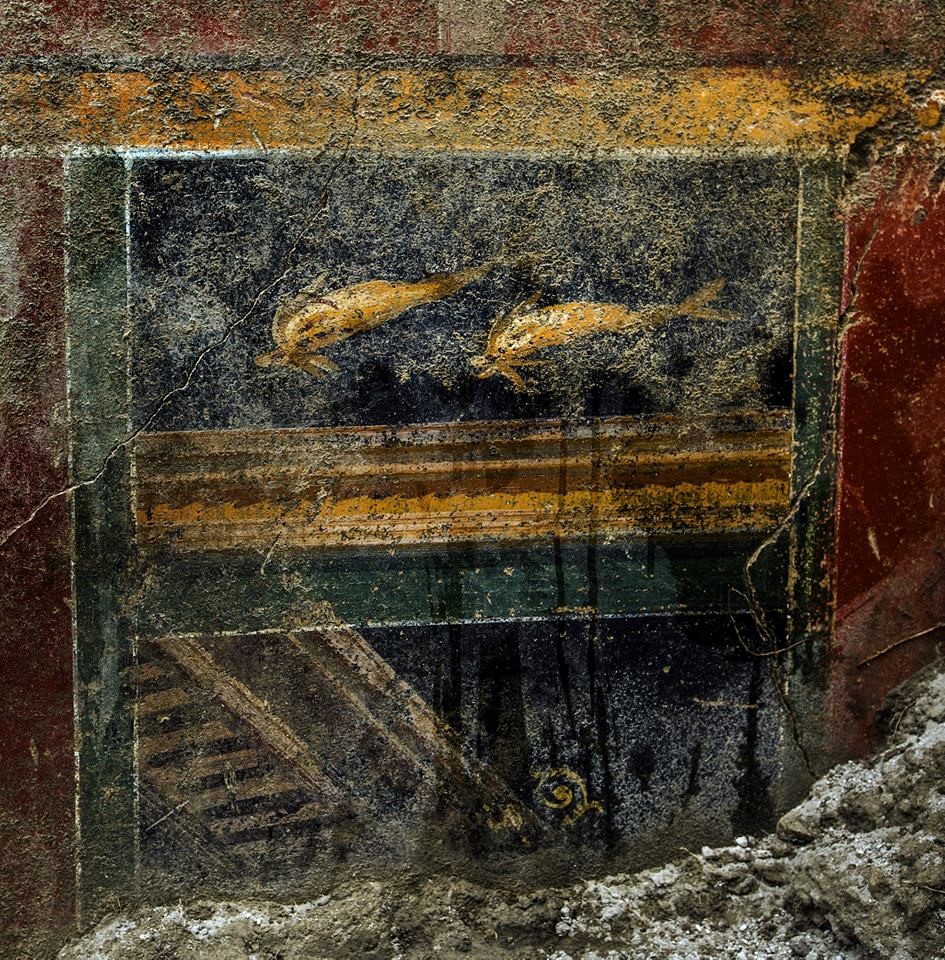 THE HOUSE OF THE DOLPHINS

Along the northern sector of Vicolo delle Nozze d’Argento, the reprofiling of the excavation fronts has allowed us to discover the front section of certain houses, with richly frescoed rooms. The frescoed rooms, which emerged right in front of the entrance to the House of the Silver Wedding, have suggested the name of the Domus: ‘The House of the Dolphins’, because two squares featuring a pair of dolphins, as well as various animals and architectural views, appear on a red background in the richly decorated entrance (fauces).

To the West of the entrance a room has been investigated in which it is possible to identify an older fresco decoration, subsequently covered by a richer decoration in the Fourth Style. It is possible that the older decoration predates the earthquake of AD 62, while the later decoration dates to renovation work following that event.

Further West, at the crossroads between Vicolo delle Nozze d’Argento and Vicolo di Cecilio Giocondo, two other frescoed rooms have been identified, which are symmetrically arranged around a small entrance; the room to the East, already mentioned, preserves a decoration with erotes, while the other to the West incorporates a band with a rich decoration with plant motifs.

Between insulae VI and VII of Regio V, the initial part of the continuation of Vicolo di Cecilio Giocondo towards the North, after the intersection with Vicolo delle Nozze d’Argento, has been investigated. The height of the pumice layer, which covered the city in the initial eruptive phase, is clearly visible in cross section. In the section of the alley where the basalt paving slabs are missing, an excavation is underway on the beaten floor mixture, which is composed of earth mixed with various waste material (animal bone, ceramic fragments, a fishing hook etc.). On the East wall of the alley, a tabula ansata traced with white paint is partially visible, which probably hosted a written inscription, perhaps a sign or an electoral inscription.

The ongoing intervention concerns an area greater than 1000 m2, the so-called ‘wedge’, located between the House of the Silver Wedding and the House of Marcus Lucretius Fronto.

The site forms part of the larger stabilisation work on the excavation fronts, which mark the  almost 22 hectare un-excavated area of Pompeii. 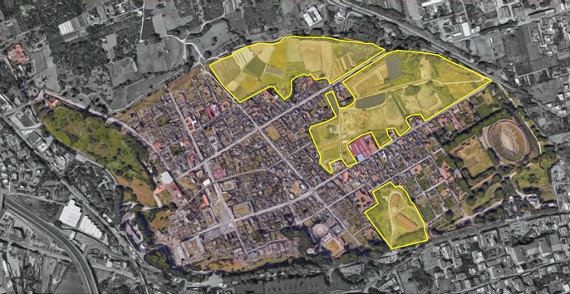 Over 2.5km of ancient walls will be stabilised, while the un-excavated area behind the excavation fronts, in Regiones I-III-IV-V-IX, will be subject to an intervention to mitigate the hydrogeological risk which, by ensuring adequate soil drainage will allow us to reduce the thrust of the earth on the ancient walls, a particularly persistent problem in the rainy season.

The comprehensive intervention on all fronts of the ancient city comes under the Great Pompeii Project, and will last about two years, at a total cost of approximately €8.5m.

The works will proceed methodically through sub-sites, in order to continue guaranteeing access to the site. Updates on the progress of the works will periodically be provided.

The excavation of the wedge is revealing structures and finds of private and public rooms, which will contribute towards enriching our knowledge of the site, and the progress of archaeological research. 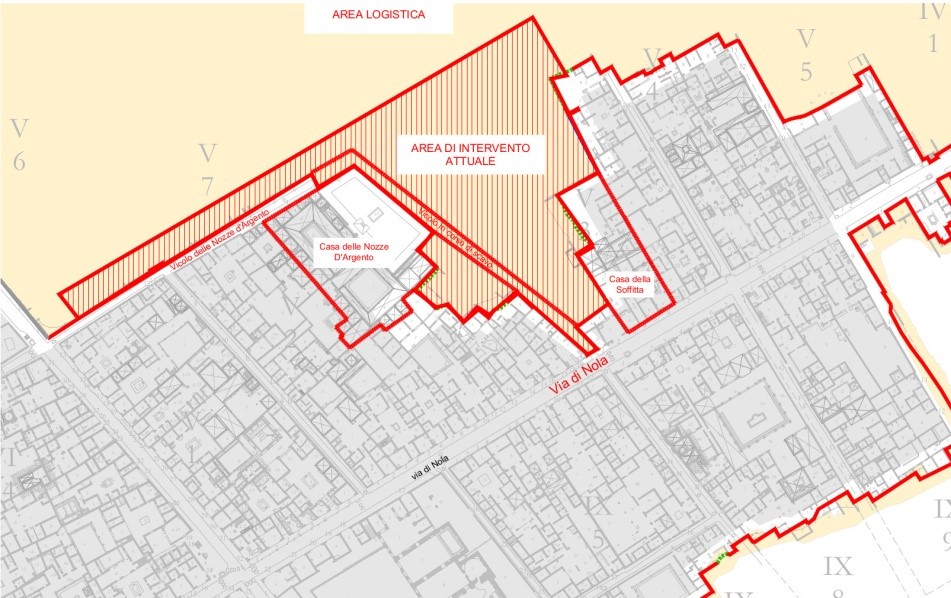 The first phase of the intervention involved the removal of all earth relating to the excavations carried out in the alte nineteenth and twentieth centuries, which was poured into the area of the wedge.

Beneath these levels, the volcanic stratigraphy has been identified, with the ash layer superimposed on the lapillus layers.

In the logistics area, specifically built on the plateau of Regiones IV and V, a large archaeological depository has been established along with an adjoining laboratory, to oversee the washing, signing, preliminary study and temporary preservation of finds which emerge from the excavations.

An unexpected event in the archaeological investigations carried out so far has been the discovery of a great number of finds, such as antefixes and clay decorations, fragments of frescoes and stucco as well as fragments of amphorae and stamped bricks, in the earth displaced by the nineteenth and early twentieth century excavations which were carried out nearby. Most probably there was little interest at the time to recover fragmentary or non reconstructible objects, and thus they were discarded.

From this point on, the excavations will proceed into layers which have lain undisturbed since the eruption of AD 79, and will be able to yield surprising finds which be the focus of multidisciplinary study and new methodologies of analysis.