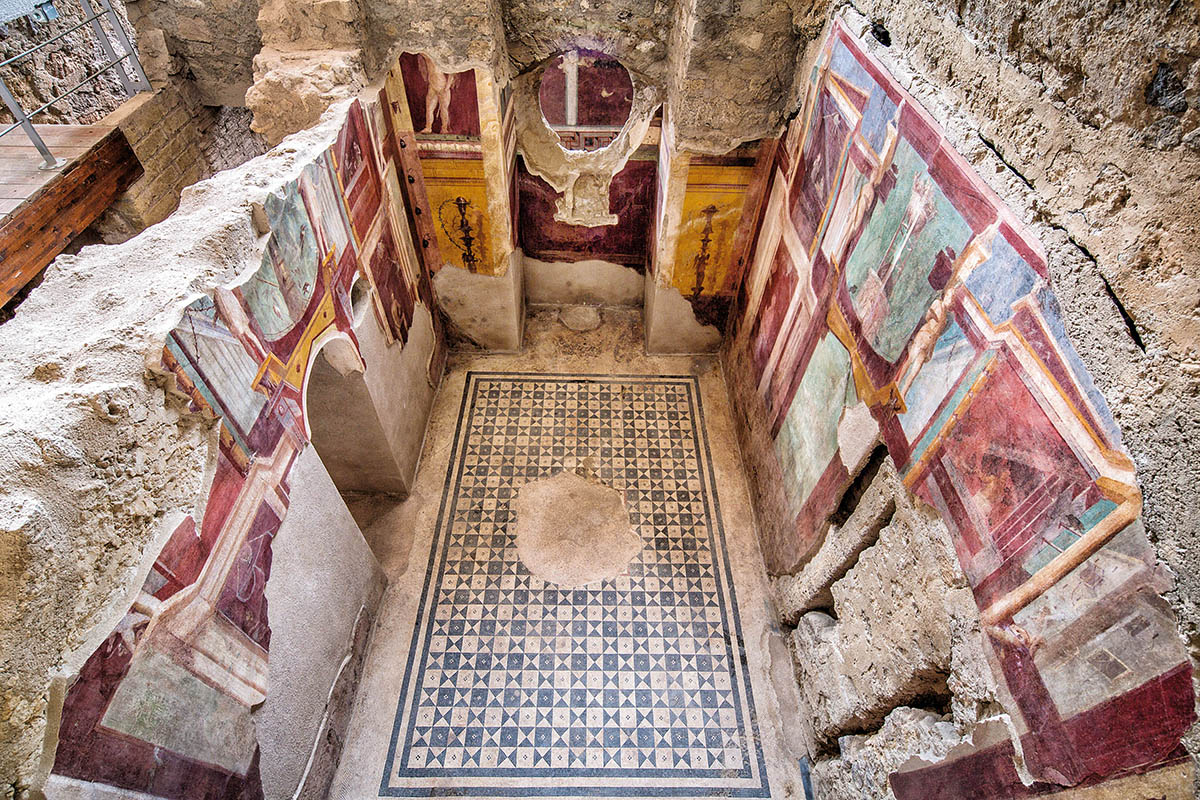 Most of the urban area in Pompeii consisted in private households. Therefore, the city provides an excellent vantage point to learn more about Roman housing and its evolution over time.

The upper classes mainly lived in domus, large houses sometimes covering an area of about 3,000 sq. m. The domus were usually based on the same main structure. The front door led into the atrium, a large central hall open at the roof. Around the atrium the other rooms of the house were located: the bedrooms (cubicula), the servants’ quarters, the dining rooms (triclinia) and living rooms.

A drain pool (impluvium) was situated at the centre of the atrium, to collect rainwater draining inwards from a roof opening (compluvium) that also let in light. From the impluvium, the water was channelled into an underground cistern and could then be drawn for household purposes. The tablinum, a study where visitors were received, was aligned with the front door and separated from the atrium by a curtain or partition.

From the 2nd century BC, due to the increasing Hellenistic influence, the number of rooms in the domus increased. Thus, around the typical garden of the Italic house (hortus), a porch formed by a row of columns (peristyle) was built, with walkways to access the living rooms. The domus were often richly decorated, with bright, colourful frescoes.

The houses of middle and lower-class families, on the contrary, were much smaller and had simpler structures.

Outside the cities, in the countryside and along the coasts, there were many different villas. Urban villas (villa d’otium) were mainly used as residences. They usually had porticoes, living rooms and dining rooms, all of which were richly decorated and often surrounded by large gardens adorned with sculptures and fountains. Usually, these villas were built on natural or artificial terraces (basis villae), or on a hillside where panoramic views could be enjoyed. Those located near the sea sometimes had pools and facilities for the breeding of fish and molluscs.

On the contrary, country villas (villa rustica) were more similar to modern farms. They had a simple plan, with a central portico surrounded by the rooms of the house, including quarters for the production of agricultural products and large storage rooms for such goods.

More often, however, the same villa fulfilled both purposes: rich residential quarters coexisted with large areas dedicated to agricultural production, like the Villa of the Mysteries in Pompeii.